Later that evening, SMPD’s Corbin and Barzola were recognized at the Miami Marlins baseball game and presented with signed honorary game baseballs.  Sgt. Henry Guzman entertained the crowds and a national viewing audience with his singing of “God Bless America.” 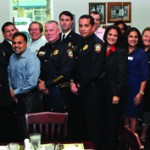 Honorees with Chamber Board Chairman and Board Members. 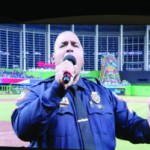 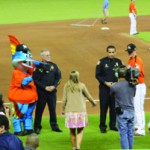 Lts. Corbin and Barzola on the field.