You are at:Home»SOUTH MIAMI TOWN CENTER

“South Miami Town Center” defines our singularly unique shopping and dining district on the east side of US1, with our civic area, Metro transit, hospital zone, library and hotel on the west side of US1. The entire area is made up of the City of South Miami, and on the east side of Red Road, the neighboring City of Coral Gables and Miami-Dade County. “South Miami Town Center” was recommended by the Mayor’s Marketing Task Force in the mid-1990s. More recently, a popular reference for the area is “SoMi” (pronounced “So-Me”).

Visitors to our community will find convenient on-street parking, a Centralized Valet on Sunset Drive, and a centrally located Municipal Garage on 73rd Street. Public transit is directly accessible at the South Miami Metrorail Station.

The best way to enjoy our “hometown” district is to walk our tree-lined streets, or park your bicycle at one of the many bike stands in town.

What we know as the City of South Miami today began as an enterprising settlement in the late 1890s. Wilson A. Larkins was 36 years old when his wife and five children arrived in Fort Dallas (Miami) in 1896. It’s from here that he built a home and general store at what we know today as Cocoplum Circle.

A leader in the settlement community, the town was called “Larkins” and in July 1899, the post office was created. When Henry Flagler’s railroad continued south from Miami to Key West along route US1, commerce moved and centered around the Sunset Drive and US1 area. The City of South Miami was incorporated on June 25, 1927. In our town center, other prominent families have historic buildings and streets named for them: Dorn Avenue, the Shelley Building, among others.

In the mid-1950s, South Miami was at the crossroads between town and country. It was where you could buy hay for your horse and a tux for a social event. The economy was booming post World War II: a bank was established, the First National Bank of South Miami, new buildings were constructed, a hospital established (South Miami Hospital) and the community prospered. The Holsum Baking Company, which moved to South Miami from Homestead in the 1930s was an important contributor to South Miami’s growth. Many long-time residents recall waking up to the olfactory stimulation of bread being baked at the Holusm bakery on the corner of Sunset Drive and Red Road. 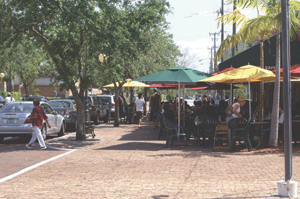 The 1990s ushered in a renaissance for our town center. The City Commission approved a “Hometown Plan” in 1992, which was to guide future development in the business district. As a demonstration project for the plan, SW 59 Avenue (now designated “Dorn Avenue”) underwent a major transformation. The new regulations allowed for outdoor dining and other pedestrian-friendly amenities in new construction. The failed Bakery Centre project (built on the 9 acre Holsum property site) gave way to another development, The Shops at Sunset Place, a retail/entertainment center. Investments in the community blossomed and new construction followed. Plaza 57, a mixed-use (office/retail) on 57th Court was completed in 2005. Across US1, the Valencia apartments were built; a multi-purpose community center was constructed, and three years ago, our infrastructure parking needs were met with the construction of the private/public Municipal Garage on 73rd Street. In 2009, the Red Road Commons apartments welcomed their first occupants.

John Edward Smith knows how to combine community service with just the right mix of image marketing and business development. In one very readable package, his publication “SOMI Magazine” balances home town interest while promoting the many businesses located in the South Miami Town Center.

The ability to capture the essence of the place that has been this New Yorker’s home since 1974 arises from Smith’s involvement in the numerous community task forces and committees on which he has served in South Miami. And he brought his marketing and image management skills to the development of special and annual local events, such as the 1983 opening celebration of the South Miami Metrorail Station, the inception of the “Santa Parade of the Elves,” “Sundays on Sunset,” and “SOMI Artwalk,” to name a few.

John Edward coordinated the South Miami 75th Anniversary Edition of the South Miami News and served as Contributing Editor for political and community affairs for the Community Newspapers. Additionally, over the years, he has organized and moderated candidate forums for several municipal elections.

An image marketing and business development consultant since 1982, he has represented institutions, organizations, business and individuals. And, just to prove that his skill set is international, among his representations include Swiss concert harpist/EMI recording artist Markus Klinko, now famed fashion photographer, for whom Smith was world-wide personal manager. For some ten years, he was the marketing producer of Vizcaya’s annual signature event, the Italian Renaissance Festival, establishing cultural liaisons in Asti, Florence and Venice.

He served as USA representative for Il Gruppo Sbandieratori del Palio d’Asti (The Flag-throwers of the Palio of Asti); named Honorary Ambassador of Asti (Italy); and recognized for his promotion and development of the Italian food-culture throughout the United States, as executive producer of La Festa del Tartufo Bianco (White Truffle Festival), and other well-established programs.

A graduate of Notre Dame, Smith brings a keen business background and a well-honed sense of giving back to everything he does. He has shared this sense of service as a member of cultural and civic boards such as Catholic Charities, Switchboard of Miami, the Miami Chamber Symphony, Informed Families, Leadership Miami, “Miami’s For Me” civic-pride campaign, and founder of Bike Miami, among other institutions and organizations. He is proud to call South Miami “home” for some three decades.