HIGHLIGHTS FROM
OUR NEIGHBORS AT THE U

THE JERRY HERMAN RING THEATRE
April 13 – 23, 2016
GUYS AND DOLLS
Music and lyrics by Frank Loesser Book by Jo Swerling and Abe Burrows
Frank Loesser’s celebrated 1950 musical comedy about rolling the dice and falling in love under the bright lights of Broadway returns to the Ring Theatre. Guys and Dolls takes us from Times Square to the cafes of Cuba, and even into the sewers of New York City, but eventually everyone ends up right where they belong.

TUESDAY,
APRIL 26,
7:30P A. DVORáK
– THE SLAVIC SOUL
Epiphany Choir and Orchestra celebrate the 175th Anniversary of this great Romantic master. Selected famous and less-known gems reveal the folklore heritage of Central Europe, as integrated into these lively works. The concert series is held at the Church of the Epiphany, 8235 SW 57 Avenue. The concerts are free and open to the public. For more information, please contact or call 305.667.4911.

SOMIartwalk© is held on the second Friday of the month from October through March.  We just completed our eighth season in presenting visual and performing arts on our sidewalks in the dining and shopping district of our South Miami Town Center as part of the SOMI Sidewalk Showcase.

VISUAL and PERFORMING ARTISTS who would like to showcase their work in next season’s artwalk (Oct, 2015-March 2016) should contact the SOMI Magazine publisher at [email protected] And please visit our website:

In April, the gallery will host nature photographer Paul Marcelini.  Growing up in Miami, Paul always loved the outdoors, and is always drawn to the water and the Everglades and not the glitz and glamor of the city.  Paul offers the unspoiled scenes of a wild and natural Florida.

In May, the vibrant and dynamic contemporary painting of Hessam Abrishami will be on exhibit.  A native of Iran, in his childhood he was greatly influenced by the ancient history surrounding him.  He left his home land to expand his awareness of the outside, changing world.  His quest for artistic excellence took him to Italy where is pursued his higher education at the Academia di Belle Art Pietro Vanucci,  in Perugia.

Two retail locations in SOMI that have a unique artistic presence are arango and The Archive.  Both are located on Sunset Drive, however at opposite
ends of town.

arango has enjoyed over fifty years in presenting Miamians modern design in housewares, furnishing and accessories. For decades, arango was a fixture at Dadeland. Last fall, arango went from the mall to main street (5864 Sunset Drive). The store regularly features exhibitions of modern design artists with their collections. 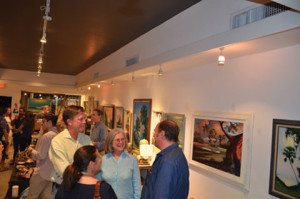 The Archive Fine Art & Collectibles is located directly east of Red Road (1559 1/2 Sunset Drive). The Archive shows a number of resident artists and exhibits featured artists on a periodic basis.