On June 25, 1927, W. A. Forster was sworn in as South Miami’s first Mayor, and the City began its nineth decade journey.

In this fourth installment of our history series we discuss the role of the redevelopment of the Holsum site, the subsequent demise of The Bakery Centre and the redeveopment into present Shops at Sunset Place.
-jes 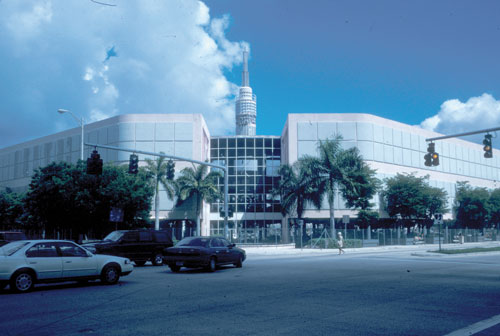 The Bakery Centre after the massive entrance steps and Hammering Man sculpture were removed.

The Bakery Centre
In 1982, during the administration of Mayor Jack Block, the City of South Miami began to hear plans regarding a large-scale building project on the 10.42 acre site of the old Holsum Bakery. To be named the “Bakery Centre,” the $35 million project was doomed from the day it opened. Within ten years, the planned mega-complex would be razed. 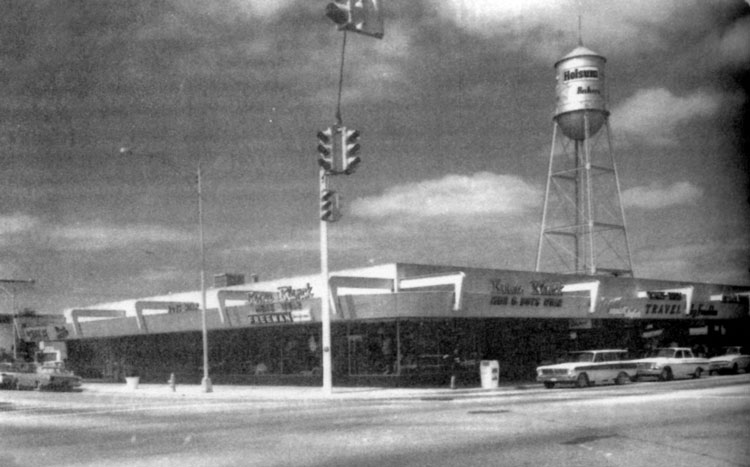 “The location of the transit station and the redevelopment of the Holsum property will probably be the most important influences on downtown South Miami into the 21st century,” affirmed the developer’s promotional brochure in 1982.

The Bakery Centre would prove a challenge for a city that imagined itself as a small town. The 1981 Comprehensive Plan provided for eight-story building heights in the commercial areas. The plan called for intensive mixed use, allowing for the highest development densities with a mixture of land uses including commercial, retail, office and residential. 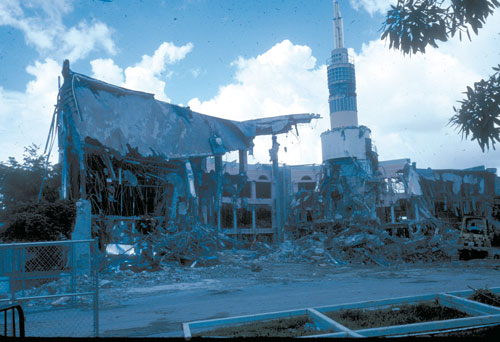 The proposed development was to have many benefits for the City of South Miami. The city’s tax base would increase by 53 percent ($504,518 in ad valorum taxes were anticipated and the City would share in the estimated $65 million in retail sales); it would redevelop 33 percent of the downtown area; increase the inventory of office space by 119 percent and retail space by 98 percent, and create approximately 4,200 jobs within the community. Additionally, some $2,428,000 was planned to be spent in offsite infrastructure improvements.

Martin Z. Marguilies, a very successful developer of residential projects and an art collector, was selected among seven or eight developers by the Holsum property principals as the one person who could pull off the project.

The property at US1 and Red Road was a prized parcel. The Metrorail station at South Miami provided linkages for attracting customers. The total project was to take six years to complete and when finished would include 300,000 square feet of retail space, a 13-story hotel with 300 rooms; two twin office towers totaling 600,000 square feet proposed at a height of 28 stories, but whittled down by the Commission to an approved height of 22 stories, and a nine-story parking garage for 3,000 cars.

An elevated pedestrian bridge from the Metrorail over US1 to the project entrance at 58th Avenue was to be built at the developer’s expense for $1.5 million, at the insistence of former Mayor Jack Block.

The project was to be completed in two phases: Phase 1: the retail shops, hotel and garage; Phase 2: the twin office towers and exhibition space of 20,000  square feet. 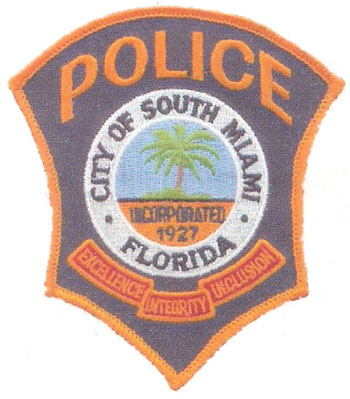 Interestingly enough, the details for the use of retail space did not include the theaters, which turned out to be the most successful space in the development. Troublesome for the city, Officer Laverne Dan Schulz of the SMPD sustained fatal injuries as he attempted to stop a fight between two gangs at the movie theater. 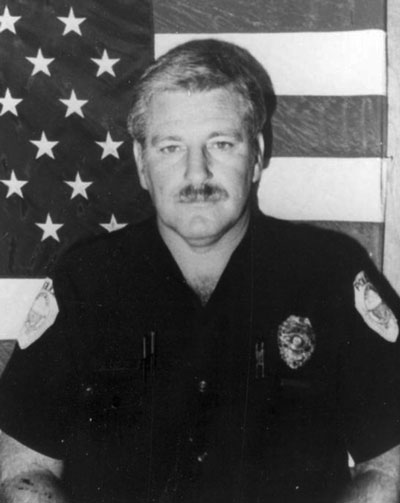 The South Miami Police department dedicated a memorial to fallen Officer Laverne Daniel Schulz in November 2007. Officer Schulz died in the line of duty in 1987 after being stabbed while working an off-duty job at the Bakery Centre.

On October 15, 1987 Officer Schulz attempted to arrest a juvenile who was part of a gang that had been causing problems at the Centre’s movie theater. While taking the suspect into custody, the officer was stabbed by other members of the gang; he subsequently died of his wounds.

In front of the SMPD is a memorial stone to this hero who gave his life in defense of our community. In 1994, through the PBA’s street dedication program a portion of SW57th Avenue was also dedicated to Officer Schulz’s memory. He is recognized at the Police Memorial in Tropical Park.

Sergeant Schulz, a Vietnam veteran, had a distinguished record with 21 letters of commendation in his personnel file. He is the only officer in SMPD’s history to have fallen in the line of duty. 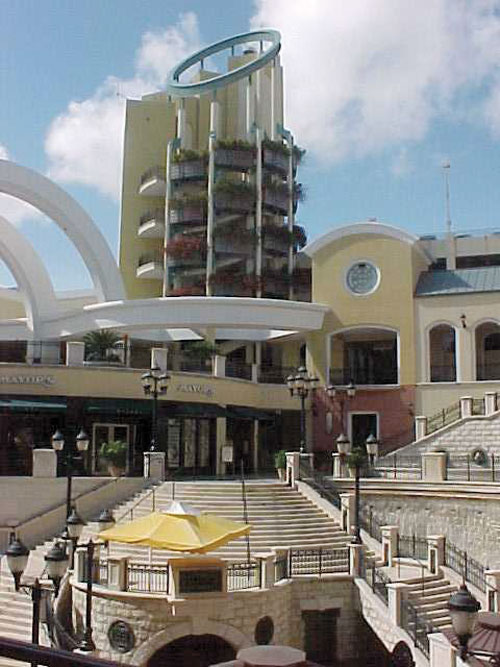 Interior of The Shops at Sunset Place

The Bakery Centre was built eventually, but it never matched the developer’s dreams. Infrastructure improvements were made and retail came in; however the Centre could never attract strong merchants—Dadeland proved to be too much competition. Mr. Marguilies lost about $20 million of his net worth, the cityscape was saddled with the user-unfriendly “pink elephant,” the Flagler Federal Savings and Loan failed, and small business owners went belly-up. The future of high-rise developments in South Miami received the death blow from elected officials in 1989. The Comprehensive Plan adopted by the Commission down-zoned commercial properties from eight to four stories throughout the city.

By 1996 the Bakery Centre had been demolished and a new retail partner came calling in South Miami, the Comras Company and later the Simon DeBartolo Group. Their project would become The Shops at Sunset Place.