At the end of the nineteenth century, a plant explorer began traveling the world studying plant pathology and discovering tropical plants destined for repatriation in his native country. David Grandison Fairchild (1869-1954), working on, off, and on again for the United States Department of Agriculture, spent decades in the pursuit of useful plants suitable for introduction into the United States, including mangos, alfalfa, nectarines, dates, horseradish, bamboo and flowering cherries.

One of the most influential horticulturalists and plant collectors in the country, Fairchild was the first Chief of the Office of Foreign Seed and Plant Introduction Section and worked for the USDA for 37 years.  His endeavors and those of other plant explorers whom he supervised was directed toward finding agricultural and horticultural crops of economic importance that had the potential to diversify the diets and gardens of Americans. This gathering of a wide variety of plant species was common practice among powerful nations in the world at the time and seen as essential for crop diversification and
economic prosperity.

David Fairchild was born in East Lansing, Michigan, on April 7, 1869.  While attending college in Kansas, he heard the famous naturalist, Alfred Russel Wallace lecture about natural selection. Later, Fairchild had the opportunity to speak with Wallace, who was a guest in his father’s home (Fairchild’s father was the president of Kansas State College). Said Fairchild, “I like to imagine that it was this meeting with the great naturalist which started my longing to see, when I grew up, those islands of the Great East
– the Malay Archipelago.”

Wallace’s tales of the “Spice Islands” inspired Fairchild. After graduating from college, Fairchild began traveling to study plants and their pathology. On one of his trips he met the philanthropist, Barbour Lathrop with whom he traveled for eight years “hunting for plants.” Lathrop funded Fairchild’s trips to places like Java. His work with the USDA took him to Asia, the South Pacific, Indonesia, the Caribbean, South America, Egypt, Sri Lanka, China, Japan, the Persian Gulf, and East and South Africa. In his capacity with the USDA, he personally introduced about 30,000 varieties and species of plants into the United States.

Dr. Fairchild’s interest in visiting those islands studied by Wallace in what was then the Dutch East Indies remained with Fairchild his entire life. Finally, on the cusp of his seventieth decade, he set out on a voyage to the Dutch East Indies on Fairchild Tropical Garden’s first collecting expedition in a ship commissioned by philanthropist Mrs. Anne Archbold, a replica Chinese junk named Cheng Ho. The six-month journey begun on January 8, 1940, was cut short by World War II. His exploits to the Malay Archipelago and the Philippines are recounted in Fairchild’s book, Garden Islands of the Great East.

Throughout his lifetime, Dr. Fairchild (who had his doctorate conferred on him by Oberlin College in 1918), continued his studies, writing books, articles, research papers and meticulously photographing plant conditions such as those that resulted from the February 1917 freeze in South Florida. He and his wife Marian (the daughter of Alexander Graham Bell) wrote a book called The Book of Monsters in 1914 that featured photographs of the insects found in “woodlands and fields.” Using macro-photographic methods, they were able to show the critters in great detail.

The history of USDA research in Miami through its first 50 years was almost synonymous with the name of David Fairchild. Beginning in 1898, various plots of land around Biscayne Bay had been set aside for field studies. Finally, it was Fairchild who was able to arrange through the War Department for land located 15 miles south of Miami. Chapman Field, named for Victor Emmanuel Chapman, the first American aviator to be killed in France in World War I, would become Dr. Fairchild’s “Ellis Island for plants.” Here, a live collection of tropical plants would be available for both teaching and scientific study–a place where sensitive tropical plants could be propagated and bred for resistance to colder temperatures prior to their introduction to other areas of the country. By April 1923, the first plants had been set out, followed over the years by thousands more.

Fairchild believed that the Miami area was the best place in the United States in which to propagate tropical plants. In a letter to his in-laws in 1916, he wrote:

“This little strip of land in which Miami is the metropolis is practically the only area in the United States free from frost where the sea breezes make it possible to live comfortably thruout (sic) the entire year and its seems to me very probable that tropical agriculture can be studied around Miami in a more intensive and intelligent way than anywhere else in the world.”

David Fairchild and his wife Marian (married in 1905) enjoyed their trips to Florida and on one occasion, Mrs. Fairchild found property she thought would make an appropriate home and garden for her family. In 1916, she purchased acreage from Florence Nugent that had been the home to a number of Miami’s pioneers. Located in Coconut Grove at 4013 Douglas Road, “The Kampong” was to become a winter home and “introduction” garden for Dr. and Mrs. Fairchild and their three children: Alexander Graham Bell, Barbara and Nancy Bell. “Kampong” is a Malay word for a cluster of dwellings; it was so named by the Fairchilds.

The Kampong had a number of small buildings constructed by previous owners when purchased by Marian Fairchild and in 1928, their home was built there. The Fairchild family hosted famous visitors including Marian’s father Alexander Graham Bell, Thomas Edison, Henry Firestone, Henry Ford, Barbour Lathrop, Wilson Popenoe and others. Marjory Stoneman Douglas and Ernest Coe often met with Dr. Fairchild at The Kampong to discuss the establishment of the Everglades National Park. In 1929 Dr. Fairchild became the first president of the Tropical Everglades Park Association. He lent his reputation to the movement, writing essays, accompanying inspection parties, and providing testimony about the value of the Everglades as a natural, unspoiled place.

One of the many devoted plant collectors who came into Dr. Fairchild’s life was Col. Robert H Montgomery (1872-1954). Col. Montgomery was a founding partner of the accounting firm Lybrand, Ross Bros. & Montgomery, later known as Pricewaterhouse Coopers. Both accountant and attorney, he wrote more than 40 books about accounting practice and tax law. Col. Montgomery shared with Dr. Fairchild the dream of creating a botanical garden in Miami, the one place in the continental United States where tropical plants could grow outdoors year-round. Each man had been collecting, documenting and studying tropical and subtropical plants from around the world, especially palms and cycads.

In 1936, Fairchild Tropical Garden was founded on 83 acres of land donated by Montgomery and his wife Nell, along with funds for developing the plant collections. Montgomery named the garden for Fairchild in recognition of the scientist’s lifelong dedication to the introduction of plant materials to the country and to his detailed study of horticulture. The garden was designed by renowned landscape architect William Lyman Phillips (a member of the Frederick Law Olmsted partnership) and after two years of preparation, the Fairchild Tropical Garden officially opened to the public on March 23, 1938.

Today’s Fairchild Tropical Botanic Garden continues David Fairchild’s scientific inquiry into the nature and benefits of plant life. In the foreword to Garden Islands of the Great East (1943), Fairchild writes,

“Among the people who come into what was once the wilderness of South Florida, there are many who have fallen under the spell of the strange and beautiful tropical plants they have seen here; and their interest has been crystallized recently by Col. Robert H. Montgomery into the Fairchild Tropical Garden…Already this Garden boasts a collection of about 250 species of palms; a collection of beautiful flowering vines; a Palm Products museum; a choice library.”

Building upon Fairchild’s fieldwork begun in Indonesia, FTBG is today funding plant exploration on the island of Halmahera, the largest island in the Maluku Islands. Dr. Carl Lewis, Director of the FTBG, says of the work on Halmahera, “We have come full circle by returning to one of the places that Dr. Fairchild could not fully explore and we are continuing the work he started.” Wrote Fairchild, “I could not help lingering on the cliff, where the branches of the trees and some large vines framed a view of the coast of Halmahera across the water. It seemed a great pity that we were not to have time to get into its interior, but it was something just to sit there and look at it stretched out before me, its range of mountains rising at places to 4,000 feet above the sea.”

David Fairchild’s unceasing devotion to horticulture lives on in the garden that honors his lifework. Today, the FTBG celebrates its 75th anniversary as an educational institution with 22,851 specimens and 3,444 species of plants, 45,000 members, an array of programs, and a host of buildings and laboratories. FTBG is dedicated to exploring, explaining and conserving the world of tropical plants and is one of the premier conservation and education-based gardens in the world. 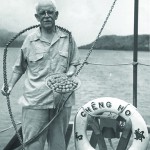 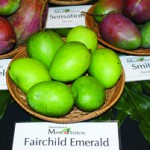 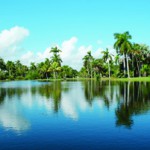