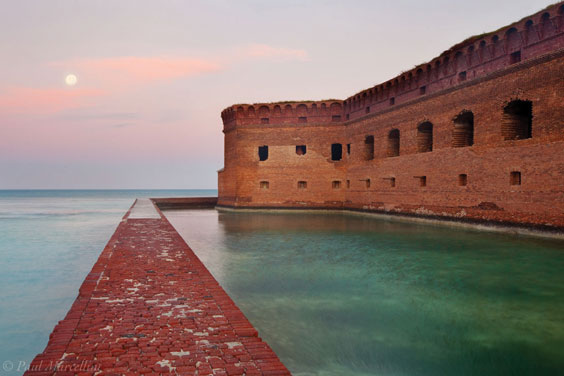 The Dry Tortugas & Fort Jefferson article is the second in a series SOMI Magazine is presenting in honor of the 100th Anniversary of the founding of the National Park Service.  Our subsequent three issues will further explore the national parks in south Florida, and seen through the lens of local environmentalist photographer Paul Marcelini. (See somimag.com Vol. XI, No. 6 for the National Parks cover feature and a profile on the photographer.)

Fort Jefferson is 60 miles due west from Key West and worlds away from the ordinary. Constructed between 1846 and 1876, the fortification occupies most of Garden Key in Dry Tortugas National Park. Seven islands make up the National Park with sea, sky, sandy beaches and the historic fort. Historic record reports that Ponce de Leon who arrived on the islands in 1513 named them the “Tortugas” for all of the sea turtles he caught there. The word “dry” was added later as a warning to sailors that the islands had little-to-no fresh water available. 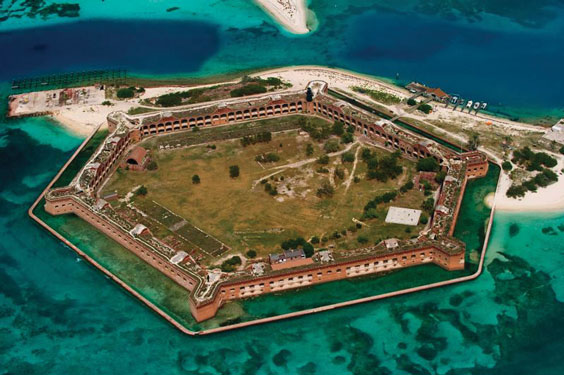 The fort, which cuts an imposing yet elegant figure, rising out of the blue water with its beautiful brick work, rhythmic openings, and seemingly decorative parapet, is one of the largest American fortifications ever built. Fort Jefferson’s principal purpose was to be a deterrent to protect one of the most strategic deep water anchorages in North America and to protect the country’s Gulf Coast.

The commencement (1845-46) of the building project corresponded with America’s growing territorial disputes with Mexico. In May 1846, the U.S. Congress declared war on Mexico. The two-year war ended in victory for the U.S. and a significant gain of one-third of Mexico’s territory, including nearly all of present-day California, Utah, Nevada, Arizona, and New Mexico. 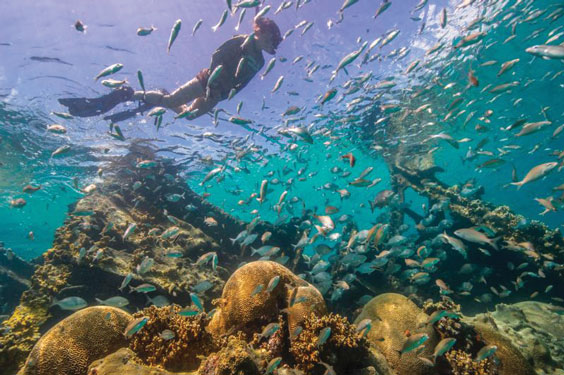 Work on Fort Jefferson continued, yet it was never finished or fully armed. Its next notable role in history was as an essential harbor for Union ships engaged in the blockade of Confederate ships. During the Civil War, the fort served as a prison principally for Union deserters and one very notable man.  Dr. Samuel Mudd was convicted of being a member of the conspiracy to assassinate President Abraham Lincoln in 1865. He set the broken leg of assassin John Wilkes Booth and allowed Booth and conspirator David Herold to stay overnight at his home before they continued on their ill-fated attempt to escape capture, trial, and hanging. Dr. Mudd was the only accused conspirator to be given life imprisonment. He was sent to Fort Jefferson to serve his sentence. While there he worked in the carpentry shop and in 1867, during an outbreak of malaria that claimed many lives, including the fort’s physician, Dr. Mudd took the lead in treating the sick. Thanks to his tireless medical service, his wife’s letter-writing campaign to free him, and President Andrew Johnson’s belief in his innocence, Mudd was pardoned by President Johnson in 1869.

By 1874, the U.S. Army had abandoned the fort, but it was used later as a coaling station for warships. The USS MAINE stopped at Fort Jefferson in February 1898 before heading to Havana where the ship blew up in the harbor. Although not the cause of the Spanish-American War (April-August 1898) Remember the Maine became a rallying cry for outraged Americans. The cause of the explosion remains unknown even though there have been a number of different findings. 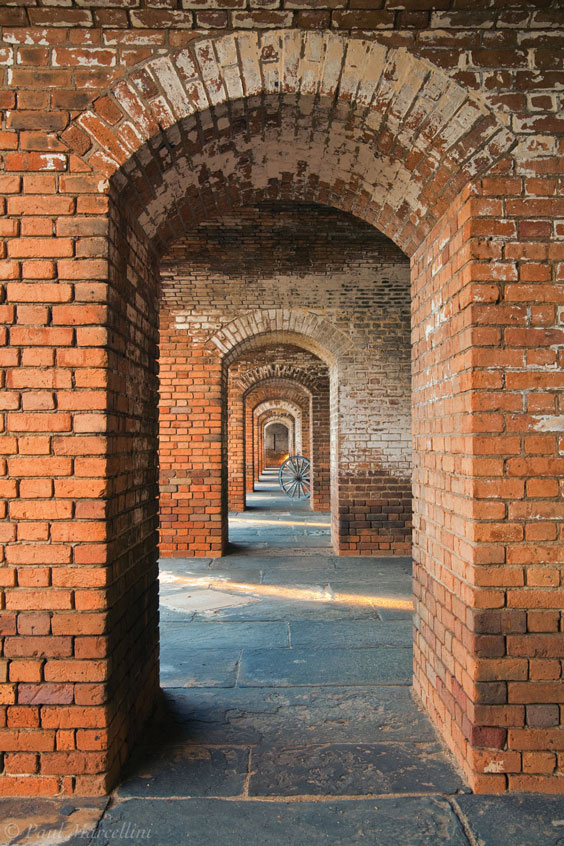 The role of Fort Jefferson as the “Guardian of the Gulf” waned, even though it was used briefly in both world wars.

The combination of the seven islands of the Dry Tortugas and Fort Jefferson makes for a unique park experience. Visitors to the park can spend a day exploring the islands, snorkeling, swimming, and touring the fort. But for those who once lived and worked at Fort Jefferson, the experience was not a pleasant outing to enjoy a vast expanse of sea, sky, sandy beaches and a coral reef.

In his 1935 New York Times article A Fort in the Middle of the Sea noted historian Albert Manucy writes about the history and architecture of Fort Jefferson. Once under the authority of the Navy Department in the early 20th century, the fort was placed under the Works Project Administration in the 1930s and was dedicated a National Monument in 1935. Manucy was the supervising historian for the WPA.

In 1934 two sets of very complete Army records were found in Key West that documented the construction of Fort Jefferson. Lt. Horatio G. Wright of the US Army Corps of Engineers sailed into the harbor to begin construction of the fort in 1846. There was no food and no fresh water, the nearest place for essential supplies was 60 miles away in Key West. Raw materials to build the fort were shipped down from northern ports. Manucy writes of the men (including slaves from Key West) working on the fort that they were “enervated by the tropical climate, attacked by fever, scurvy, dysentery, and rheumatism.”

In his role as historian, Manucy gives highly-detailed accounts of the fort. He describes the fort’s architecture, the 16 million bricks it required, and of the work the WPA was doing in an attempt to mitigate the damage done to it by wind, weather, salt air, and the occasional pilfering of bricks and other materials by “citizens.” He writes:

So Fort Jefferson remains—an historic relic, its strategic function outlived. But in the closet-like galleries, where the long reaches are no longer impeded by ponderous guns ready to belch forth smoke and hot iron, lurks the ghosts of forgotten engineers…union soldiers, and prisoners that died in shadowy casemates. 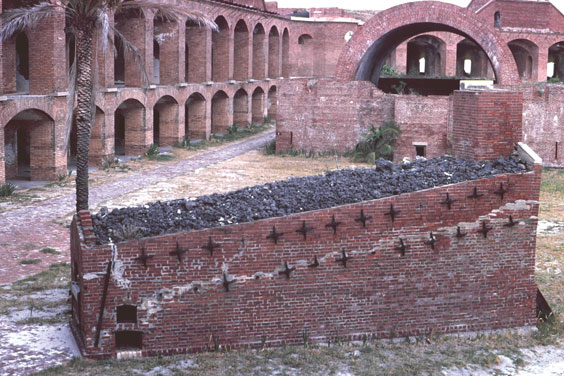 In the 1940s the jurisdiction of the Monument came under the National Park Service. NPS Custodian Robert Budlong was responsible for the care of the fort and for hosting those who came to visit the site from 1942 to 1944. His mandatory monthly reports, while intended to be mind-numbingly bureaucratic, are notable for his ironic turn of phrase peppered with sarcasm. Sea birds, such as Sooty Terms are in abundance during nesting season, one of the largest gatherings of these birds in the world. Under the heading of wildlife in his April report: “Mosquitoes.” And a year later under the wildlife section, in June:  Our mosquitoes also are suffering from rationing. We have as many mosquitoes as ever in the past, maybe more, but with the skeleton personnel now on the island (and I mean skeletons) the mosquitoes are having a hard time trying to live on the custodian and his Man Friday, instead of the superabundant food supply of other days. As may be imagined their appetites are insatiable, and hungry hordes of them pursue us at all hours of the day and night. They don’t just drill a hole and extract the juice—they tear out huge chunks and fly to the terreplein of the fort to eat them.

Budlong also reports on the endless destruction of the fort’s structure due to the elements. In the modern history of Fort Jefferson, the NPS has launched a very successful program to restore, replace and stabilize key components for the physical well-being of the site and to better interpret it to the 60,000 visitors who come to see it each year.

It [National Park] stands as a collective memory of where we have been, what sacrifices we have made to get here, and who we mean to be. By investing in the preservation, interpretation, and restoration of these symbolic places, we offer hope and optimism to each generation of Americans.”