LESSONS IN LOVE, ENDURANCE AND PATIENCE

For most people who set a personal goal of running a marathon, achieving it once is enough. After all, the punishment to the body is such that most rational human beings don’t relish the pain, misery, nausea and psychological stress that pounding pavement for 26.2 miles can bring. Now imagine doing it eight times. A year. For 13 years on average.

That’s what Josh Liebman, real estate broker, TeamFootWorks distance running program director and resident uuber runner, did when he crossed the finish line of his 100th race at the Miami Marathon on February 2. Liebman says reaching the century mark was never his goal, but there is one thing that has always motivated him to run.

“People would say, ‘When are you going to stop?’ And I would tell them, ‘When it’s no longer fun,’” Liebman says with an impish smile. “The only races I ran just to get to 100 were in the mid-90s because I was overweight and undertrained. They were miserable.”

Running just to make a goal has never been his style, Liebman says. In fact, it was more whim than purpose that set him on this path: a friend asked him to help his wife train for the 2001 Country Music Marathon in Nashville back when Liebman was an MBA student at University of Florida. Their first training run was 10 miles, a distance most people only think to cover by car. When the friend picked them up, Liebman had tendonitis and inner thighs that had melted together like chewed bubblegum because of chafing but otherwise felt good. Still, he had no intention of entering the marathon, until at the last minute he changed his mind, bought a plane ticket and completed the race in less than 5 hours, his goal at the time.

Setting goals is just one part of what makes Liebman successful. The other, says Hans Huseby, ower of FootWorks in South Miami, is his understanding of how to motivate people and how to train properly, which Huseby says made him a natural fit for TeamFootWorks, the non-profit Huseby and wife Laurie founded to foster a love of running. “Josh makes running available and accessible to everybody, and that’s the way we want TeamFootWorks to be,” Husbey says, adding that Liebman is “just a great guy.”

With a wrestler’s build, Liebman looks an unlikely runner. He turned 40 on April 2 and plans to continue pursuing this passion that has taken him around the country and to other parts of the world. He’s run in races from the Atlantic to the Pacific, including Boston, New York, Chicago and Anchorage (twice), and in exotic locales like Toronto and Dublin, Ireland — his favorite he says, run on Halloween. Lest you wax poetic about the splendor of the Alaskan wild or the gritty beauty of the Old Country, Liebman says when you’re running a marathon, “you could be anywhere.” In fact, in some places, runners will do laps in a parking lot simply to qualify for the 50-state club. It’s not a group he wants to join; he would much rather use marathons as a good excuse to travel and run where he enjoys it.

For his part, Huseby says he’s “really happy and proud” that Liebman achieved the century mark, which he calls a “heck of an accomplishment.” Still he can’t help but issue a challenge: “I want to know if he’ll do another 100?” he says with a laugh.

So you might think Liebman is just a runner’s high junkie, seeking the thrill solely for personal benefit. But there’s something else that motivates him – giving back to the community. It’s a value his father instilled in him as a reluctant teen volunteer at the Miami Youth Museum in the Bakery Center, where The Shops at Sunset Place now stand. Liebman laughs about it now, but at the time, he hated giving up his Saturdays and even resented his father for imposing such a harsh sentence on him. In hindsight, it was a lesson he’s come to embrace. Every race now has a charitable component, beginning with a Disney Marathon in 2002, where he raised money for the American Diabetes Association. His sense of service also propelled him to run for South Miami City Commission in 2012, where he is midway through his first four-year term.

That lesson is particularly poignant now, as Liebman struggles to care for his father Walt, who recently had his tongue and voicebox removed to fight an aggressive form of throat cancer. The elder Liebman has finished a round of chemotherapy and painful radiation treatment, and still the cancer grows. He’s currently in a second round of chemo. And through it all, Walt is still teaching his son lessons in patience and endurance.

“The doctors have described my father’s pain tolerance through surgery, chemo and radiation as super-human,” Liebman says with genuine admiration. “Maybe that’s why I can run like I do…maybe I inherited his high pain tolerance.”

Still he concedes with a laugh that time is a thief: “I tell people, the older and heavier you get the longer these races become.” So says the man running 26.2 miles in less than 4 hours. For now, you can catch him doing what he’s always done – motivating scores of runners in the TeamFootWorks training program each Saturday morning. It’s what he loves to do. Whatever happens with his father, Liebman plans to continue running. In many ways, he believes there is no limit to the number of marathons he can do. “The first marathon is the hardest. Once you’ve done that, you’ve overcome the mental challenge. Then it’s just a physical challenge.” 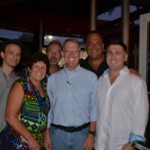 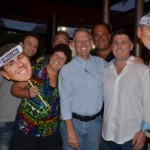 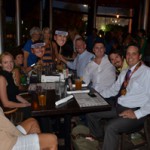