You are at:Home»Magazine Archive»Volume XII»APRIL/MAY 2017»LUIS VALLE, PAINTER
By Donna Shelley on April 5, 2017 APRIL/MAY 2017, In The Spotlight, Topics, Volume XII 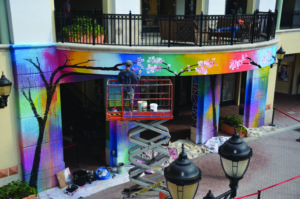 It is often said that the United States is a place where people from all the over the world contribute their social, religious, artistic, and culinary pathways to the great American melting pot. Luis Valle (aka El Chan Guri) is one such contributor. His paintings and murals are a mixture of his interest in other cultures and an embodiment of his Central American roots. 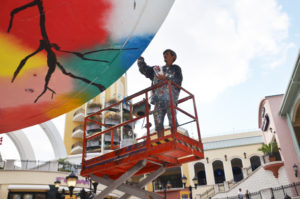 “My work is a blending of different cultures and different iconographies and include animals and animal spirits,” said Luis.

Luis came to the United States from Nicaragua as a young child, settling in the Kendall area with his family. He received a bachelor of fine arts from Florida State University and his master’s degree from New York University. He began living in New York just two weeks before September 11, 2001. Living in the Big Apple was another strong influence on Luis’ work. Access to some of the finest works in the city’s museums and the highly diverse art scene in Brooklyn added to his interpretation of art. 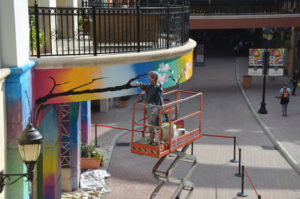 After five years in New York, Luis returned to Miami, where he became very active in the Miami art scene. Today, his distinctive murals can be found in local businesses and as street art pieces in Wynwood and around south Florida. One of his murals, “Cherry Blossom Peacock,” adds motion and life to the walls near the fountain at the Shops at Sunset in the City of South Miami.

Luis has worked with video, metal fabrication, and used live female models as canvases. His paintings and murals have moved in a decidedly more surrealistic direction. A dedication to spiritually, shamanism and self-realization imbue his art. Recent work uses patterns and dots to give form to frequencies, vibrations, and kinetic energy. 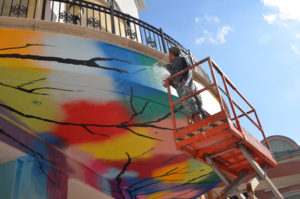 “Art is always evolving; it is what you sometimes don’t see, the unknown,” said Luis.

The artist learned a lot about the business of art in his roles as assistant, consultant and curator to local art galleries. He manages his own art sales. He relies on social media, the internet, pop-up art shows, referrals and word-of-mouth to market his work. Recently, he found a location in Little Haiti that serves as his studio, gallery and home (where he lives with his rescued stray dog “Gallery”). 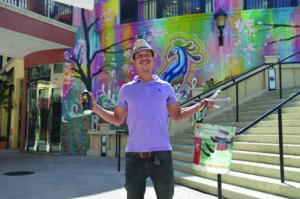 His personal style has been shaped by his spirituality, concern for a healthy lifestyle, yoga, friends and clients. He is involved in the community, working with organizations such as Arts For Learning Miami, the Miami Children’s Museum, The Miami Dade Library System, Boys and Girls Club of Miami, The Overtown Youth Center, Dade County Public Schools, The Art Experience, Giants in the City and Irreversible Projects, among others. He also works with art galleries and studios to put on exhibits and events. Luis was co-founder of Brisky Gallery Miami.

“It is satisfying and gratifying to be a part of the community and an honor to have my work seen by thousands of people,” said Luis.

For more information about Luis Valle and to see more examples of his work, please visit his website
at http:// or contact him via email at .