You are at:Home»Topics»Fashion»MEN TREND
By Giancarlo on June 1, 2015 Fashion, JUNE/JULY 2015, Topics, Volume X 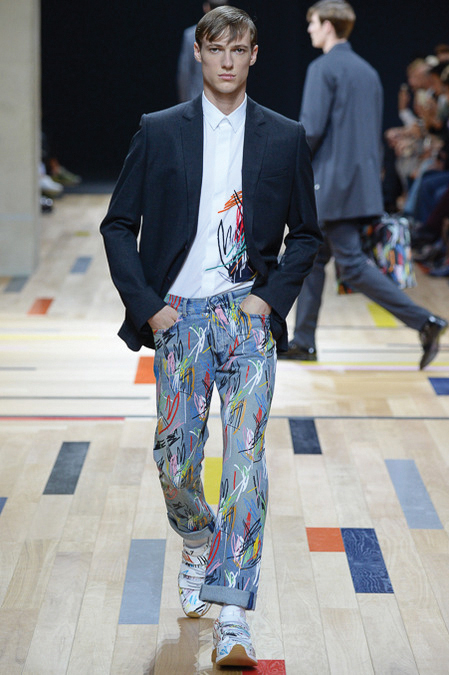 The notion of “trends” in menswear seems, at times, curiously redundant. Men’s style happily sits on more even terrain than women’s, with less focus on “out with the old, in with the new” and more on solid investment pieces to build on season after season. As optimistic as we tend to become about spring’s emergence and the promise of sun-drenched days, May weather still calls for a dose of wardrobe realism. Men shop less frequently than women, but when we do, studies show that we’re prepared to spend more. But what should be on the sartorially attuned man’s radar for spring?  Here we outline the subtle additions that will make their presence felt in your wardrobe.

Menswear designers are aware that men exist outside of the suited corporate world and demand comfort and style. Pushing style forward, designers did not disappoint, marrying relaxed fits with varying proportions and versatile pieces that lend themselves on occasions to season-less dressing. From the wide-cut of luxe trousers, to the playful use of prints and masculine colors; menswear this season is injected with a fun, fearless energy; Bomber jackets, shorts, printed shirts and other contemporary essentials were seen around at Dsquared and in various collections such as Prada and Bottega Veneta.

Relaxation is definitely on the mind for spring 2015 and for many designers that meant sending their stylish men out to sea. Pushing the same freeing style perspective, labels that included Gucci and Michael Kors kept the momentum with denim and nautical inspired garments.  Michael Kors , embraced navy nautical stripes and furnished raw denim jeans with a straight cut. The jeans are a standout that fit right in with the season’s denim trend. Meanwhile, the sport of sailing found a place in Lacoste’s spring outing, giving life to blue graphic prints. If there’s a man that appreciates the rustic appeal of the cowboy, it’s Tom Ford; one of his houses is a Santa Fe ranch and it’s an image of masculinity he mined during his time at Gucci and in his film, A Single Man. For spring 2015 he offers sleek denim jackets and shirts, worn with jeans. Prada followed suit with Seventies-inspired denim coats, jackets and jeans and in its catwalk shows Burberry Prorsum debuted jackets and tailored blazers in the work wear fabric. How to do it without looking like a reject from The Outsiders? Keep it neat, sharp and dark in hue.

Other designers dished out casual fashions that are not only easy to wear, but smart at the same time which made an interesting reference with a romanticized summer vision. From broad painterly splashes to subtle, nuanced detailing, prints are everywhere in menswear for spring. From block-color swirls over suiting at Alexander McQueen to rich, intricate mosaic tile prints, there isn’t a jacket or pair of trousers next season that won’t come unadorned. Particular favorites included the lavish rococo curls and spirals at Dolce & Gabbana, a very visual statement of “go big or go home”. While we loath to suggest you “inject” your wardrobe with a “pop of color” it’s an undeniable fact that there’s a strong undercurrent of bright shades throughout menswear for spring. Crayola block colors aren’t just accents this season, but are emblazoned over coats and jackets at Burberry Prorsum , Dior Homme and Raf Simons. If you’re bored of dull shades, go for the take-no-prisoners tangerine. At least you’ll get noticed while waiting to get served at the bar.