“I am interested in people, and this interest finds an outlet in history, particularly local history. History is more than information. It is the meaningful story of people in action.”  Charlton W. Tebeau (1904 – 2000)

Dr. Tebeau’s words are as relevant now as they were the day he wrote them. The noted Florida historian and educator was one of the founders of the historical society from which the History Museum of Southern Florida (HMSF) was born. The museum was renamed HistoryMiami in 2010. Celebrating 75 years of presenting Miami’s past through scholarly publications, exhibitions and programming, the museum later located at the Miami Cultural Center downtown, continues what Dr. Tebeau, George Merrick and Marjory Stoneman Douglas and others envisioned for the people of Miami.  The museum specializes in the history of southeast Florida, including greater Miami, the Florida Keys, Everglades, the Caribbean and Latin America. Programming includes exhibitions, city tours, education, research, collections, and publications on the importance of the past in shaping Miami’s future. As the largest repository of artifacts and archival materials related to the region’s history, HistoryMiami is the place to go to gain an understanding of the people, events and everyday life of the area from the earliest indigenous peoples 12,000 years ago to the present day.

“We are telling Miami stories in new, exciting ways and we are on a new frontier in the way in which we present history,” said Stuart A. Chase, president and CEO.

The presentation may change, but the message remains the same. People are interesting, people make history, and history is being made every minute of every day. History is the Tequesta and 2,000 years ago and it is Cuban children coming to the United States 55 years ago during Operation Pedro Pan. Artifacts help to tell the story. They range from a Glades culture pottery dating from 500 BCE, to a one- of-a- kind dress designed in 1994 by Irma Penalver for the Queen of Salsa, Celia Cruz.

The board and Mr. Chase are committed to taking the museum in a direction designed to reflect Miami’s cultural dynamism. They are concerned to inform museum audiences about all aspects of the region’s history, both past and current. Thanks to the recent addition of the space once occupied by the Miami Art Museum, a 135 per cent increase in square footage, this goal has become attainable. The new space temporarily known as the “south” building accommodates new permanent and temporary exhibits such as History and Ourselves and Operation Pedro Pan, the Cuban Children’s Exodus, among others.

Just across the plaza of the Miami-Dade Cultural Center is the “north” building. This 40,000 square foot structure operated as the museum for decades. It still does. However, there have been some changes made just beyond the front door. Where once was a gift shop and temporary exhibition space is now an area devoted to educational programming.

In the future, the museum will be able to double the amount of space devoted to the storage of archival materials and collections and to increase the number of those participating in both adult and student education programming. The plan is to have the north building serve as the center for education, archives and research and certain permanent exhibitions.

With the assistance of a general obligation bond from Miami-Dade County, a connector between the north and south buildings is under consideration. The two buildings are owned by the county and share the plaza with the main branch of the Miami-Dade County library. This branch is one of the key repositories of Miami’s history. How then to make the somewhat sterile plaza on which these essential buildings stand more welcoming? The bond can help here too by the creation of a pleasant and inviting public gathering space complete with food vendors and shaded seating areas.

“We are forever thankful to the county who own the buildings,” said Mr. Chase.

The Miami-Dade Cultural Center was designed by renowned architect Philip Johnson (1906 – 2005). Located across from Government Center, the large complex rises 14 feet above the city sidewalks, creating a refuge from the bustle of the street. Rendered in a Spanish-Mediterranean-Italian style, the complex combines elements of seventeenth century plazas with a modern twist. With the aid of the Decade of Progress bond, the work was commissioned in 1972 and completed in 1983. The HMSF moved into the north building in 1984. The center was part of plan to revitalize and incentivize tourism in downtown Miami by bringing cultural institutions, hotels and the Knight Convention Center, Metrorail and other improvements to the city center.

The challenge faced by most history museums is to arrive at the proper balance of exhibits, education, public outreach, and events to keep the public interested and involved. HistoryMiami is meeting that challenge by presenting exhibits and programs that are relevant and current. Exhibits that feature graffiti artists, cultural touchstones such as a neon sign from a once popular Miami eatery, and live performances, like the recent Flamenco demonstrations on the museum’s small stage are examples of public outreach that help keep HistoryMiami fresh in the minds of the museum-going public.

Working together with Stuart Chase, the staff and the museum’s in-house exhibit designer Freddie Jouwayed, deputy director Jorge Zamanillo said, “We offer new ways to interpret the museum’s collection and with a new viewpoint, we can be responsive to the community and its culture.”

Mr. Zamanillo began his career with the museum as a curator and was recently tapped for the deputy director position.  He is pleased with the addition of 15,000 square feet of exhibition space in the new building. It means that the visitor will be afforded a greater menu of experiences and programs. For example, the Folklife Gallery, complete with a stage and sound system can offer something different to do every week. The History and Ourselves exhibit highlights recent acquisitions such as artifacts from Burn Notice, the popular television show filmed in Miami or a handmade raft that safely transported seven Cuban refugees to the shores of Miami.

“In the future we will remain in these two buildings. Renovations are planned as well as doubling the archives and collections storage,” said Mr. Zamanillo.

The museum has a program to digitize as much of the archival collections as possible and currently has 10,000 high-quality images from historic photographs available online.  The museum is the official repository for all archaeological material recovered in the county and provides educational programming to over 14,000 students each year.

Mr. Chase, who has been a museum professional for over 35 years said, “We document history and tell the stories. We are the most accessible institution in Miami from every point.”

The displays pictured above in the permanent exhibit “History and Ourselves” traces south Florida from the time of the archaic Indians (7500-500 BC), through the pioneering days of Miami, the Monroes of Cocoanut Grove, a Miami trolley, a 50s lunch counter, a Cuban raft and Haitian boat. 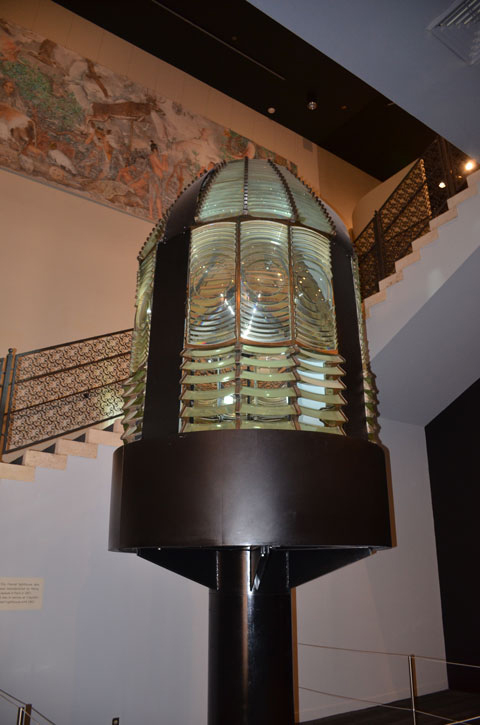 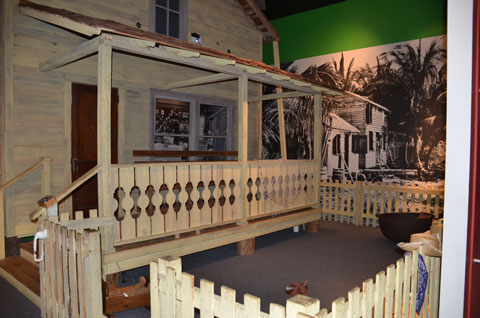 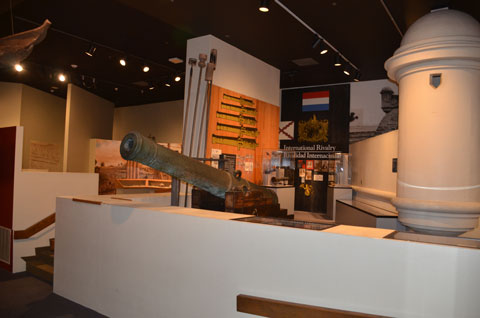 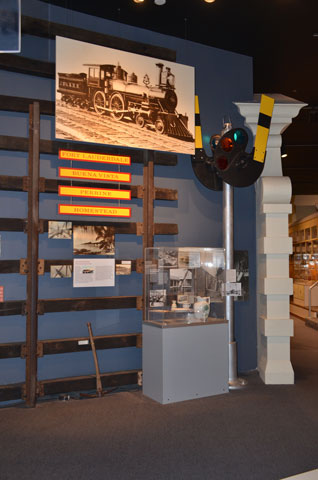 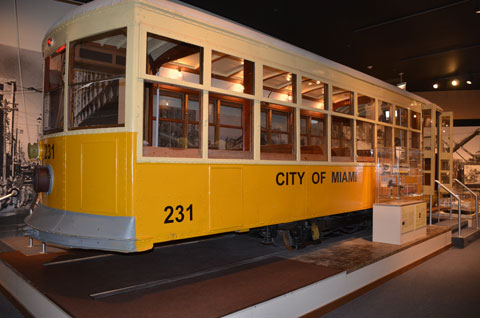 Between 1960 and 1962, more than 14,000 unaccompanied Cuban children left their country to come to the United States. It was the largest recorded child refugee exodus in this hemisphere.  The exhibition displays relevant artifacts and tells the story of parents who made the difficult decision to send their children away to avoid indoctrination by the Castro regime and the emotional trials of families separated and later reunited. About half of the children were reunited with relatives or friends at the airport and half were cared for by the Catholic Welfare Bureau, relocating the children to 30 states. Developed in partnership with Operation Pedro Pan Group, Inc. and with the support of a $300,000 grant from the State of Florida, Department of State, Division of Cultural Affairs, the exhibit presents an important, often little-known chapter from our past.

Pictured above: Monsignor Bryan O. Walsh of Catholic Charities with his charges at one of the camps housing the youngsters. Girls gather in a housing facility courtyard which flies the Cuban flag, after all, the prevailing thinking was the children would be reunited with their parents once things on the island nation returned to normal.
Share. Twitter Facebook Google+ Pinterest LinkedIn Tumblr Email