The South Miami community has a variety of great business establishments. Among two of the best – and best known – are the Big Cheese Restaurant at 8080 SW67th Street and John the Tailor on 5609 SW 74th Street. What do they have in common? Longevity, a dedication to customer service, excellent reputations and consistent quality.  These accomplishments are no small feat in today’s dynamic world of instant everything and cheaply made goods from across the sea.

The Big Cheese, in operation since 1984, is owned by boyhood friends Bill Archer and Garry Duell. Bill took an interest in cooking at a very young age and according to Garry, always had the instinct to create the tastiest food, no matter how humble the dish. The Italian restaurant is something of an institution among sports stars, especially those associated with the University of Miami’s football team. It has served as a hot spot for lunch and dinner and a bit of a hang-out for ‘Canes players, both for those who are up and coming and for those who made it to the pros. However, it is first and foremost a family-oriented restaurant dedicated to serving great food made from the finest ingredients in quantities that usually require a “take home” box. And that is what Bill and Garry wanted from the start and have provided for 30 years. 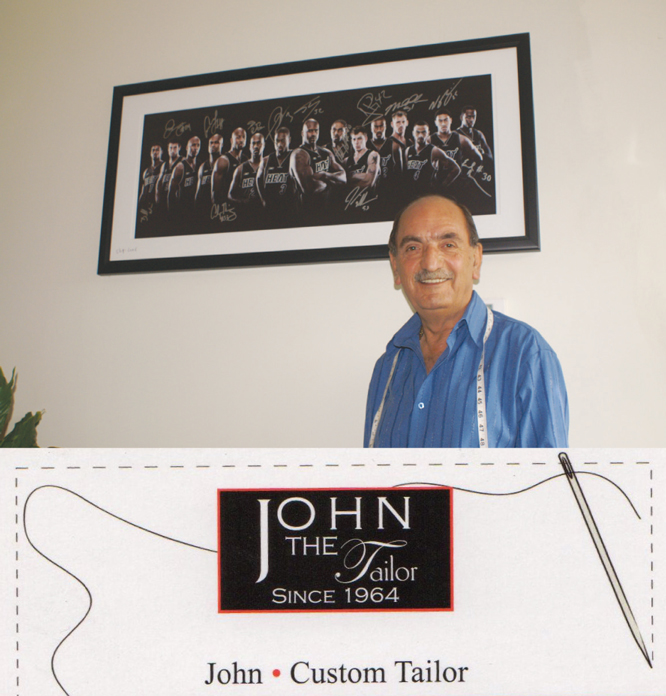 John Khoury is the owner of John the Tailor. A highly-skilled tailor before he left his native Lebanon in the 1970s, John made his first home in the United States in Buffalo, New York, where he settled with about 500 of his fellow countrymen. His considerable skills as a tailor got him noticed rather quickly and for a time Johnny Carson was a client. Deciding that the snows of Buffalo had lost their charm, John and his wife Layla headed to sunny Florida in 1981 and have been here ever since. John has grown his reputation to the point that he has been named among the top 12 tailors in America by Details magazine.

Celebrities such as Pat Riley, Erik Spoelstra, Alonzo Mourning, and Penny Hardaway continue to be a mainstay in John’s business as well as other sports stars, mayors, city and county commissioners, and clients from all over the state of Florida. In addition to making suits and slacks, John tailors ready-to-wear clothing for both men and women. He says it is all about the fit.

The Big Cheese was originally in the building where Wall’s Ice Cream is located. It is difficult to imagine such a small physical plant succeeding as a restaurant but the Big Cheese had the right formula. After seven years on the east side of the street, the operation was moved across the road to its current, roomier venue in 1991. It now seats 150 and has maintained its casual scene and seriously good food.

Roxanne and Bill Archer in California with plum tomatoes that are destined for Big Cheese’s marinara sauce.

“Bill and I grew up together right here in Miami. We went into business mowing lawns when we were kids and later became partners in the Big Cheese. We have one of the longest partnerships on record, I think,” said Garry.

Bill Archer is the culinary expert behind the Big Cheese. He created all the recipes for the more than 120 items on the menu. Beginning as a prep cook at the age of 14, he was later “hired away” by former bosses for a top pizza establishment.  At 18 Bill worked for Dario’s in San Francisco with Italian and Greek chefs who taught him the fine art of Italian and Mediterranean food preparation. Bill transferred this knowledge and experience to the Big Cheese, becoming a restaurateur at the age of 24.

“We buy the finest flour, the best plum tomatoes from California for our sauce, and the tastiest cheeses from Wisconsin. There are no shortcuts, everything is made from scratch. We have always kept our prices reasonable even when our suppliers haven’t,” said Bill.

John Khoury opened his tailor shop in South Miami in 1981. His childhood in Lebanon was one distinguished for the amount of work he did from a very early age. At seven, his grandmother taught him to sew on a machine, and by the time he was 11, he was an apprentice in his uncle’s tailoring shop. By 13, John had made his first pair of pants and by 15 he had made an entire suit and a shirt to go with it.

“I worked with my uncle, who was the best tailor in Lebanon, helping him manage 35 tailors until I was 22 years old,” said John.

John’s accomplishments as a tailor are matched by his love for his family. One of 15 children, John brought 12 siblings to the United States to live. All have prospered here, including his brother Maroun who owns Khoury’s Restaurant on SW 73rd Street in South Miami, and his brother Joseph is a tailor with him at the shop. Many are graduates of the University of Miami.

“I am so proud of what I have done all of my life, thank God. I am proud to be an American; this country gave me a chance to be a human being,” said John.

Like the owners of the Big Cheese, John believes that business is built on trust, good prices and excellent customer service.

“My mother told me that you get your life from your customers. Never say no to them,” said John.