South Miami Town Center from Dixie Highway to Red Road includes historically designated buildings dating from 1914 to 1955 along Sunset Drive. The Crossroads Building at 5700 Sunset was built in 1955 and represents the most modern architecture in the historic building inventory downtown.

It was no accident that the Crossroads Building was sited at one of the city’s major intersections.  Firmly planted in the streetscape, this landmark wraps around and dominates the corner at Sunset Drive and Red Road, announcing its importance as a post-World War II shopping center from the western entrance to the city’s downtown. Billed as the place “Where town and country meet,” the building reflects a time of prosperity when the nation was re-building and the suburbs were all the rage. 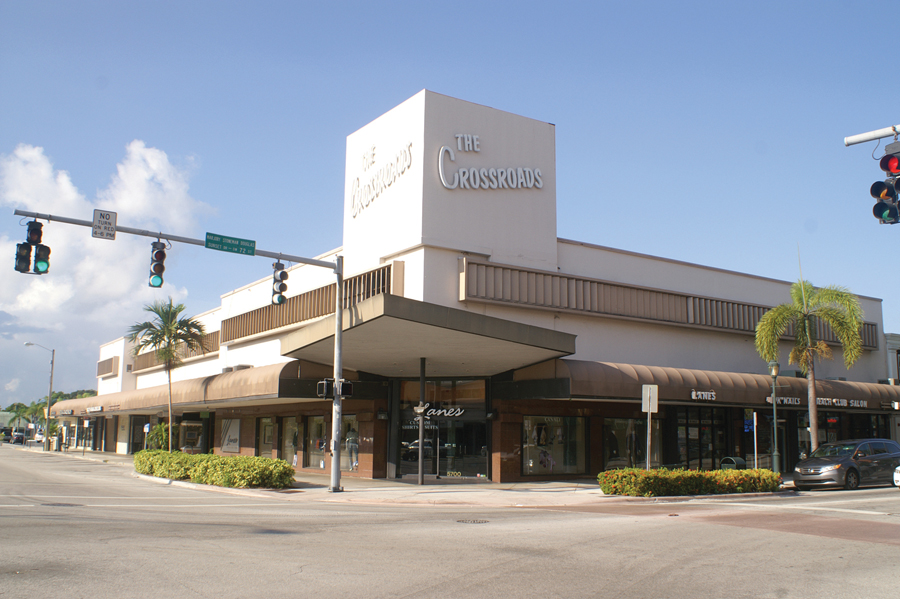 Architect M. Tony Sherman (1910-1999) was hired to design the building. Sherman had a successful architectural firm in Miami, M. Tony Sherman and Associates. He is noteworthy as the designer of several Mid-Century Modern hostelries, including the Jolly Roger and Yankee Clipper in Fort Lauderdale, the original Castaways in North Miami Beach, and the original Tropicana Hotel and Casino in Las Vegas. Stylistically, a number of his commissions were playful, reflecting the kind of Florida resort image that pervaded the popular culture of the 1950s. It was a blend of themes that included pirates, ships and Polynesian-inspired lounges decked-out with tiki statues, torches and other kitsch.

Sherman originally practiced in New York where, according to the Miami News of 1960, he worked with the New York Housing Authority and did special exhibits for the World’s Fair. He came to Miami in 1947 and opened a new office in the Sans Souci Estates in North Miami in 1960. Sherman seems to have supported his firm with commissions that included freezer plants, cold storage plants, and office buildings as well as his more imaginative motels and hotels.

Conceptualized during a time of exuberance for the “atomic age” and modernity, the Crossroads Building reflects the nation’s belief in a brighter future.  In post-war America, cities remained healthy and suburbs were expanding with the aid of the GI Bill, increased automobile ownership, and improved roadways.  The City of South Miami experienced the same era of prosperity and began to promote itself accordingly. 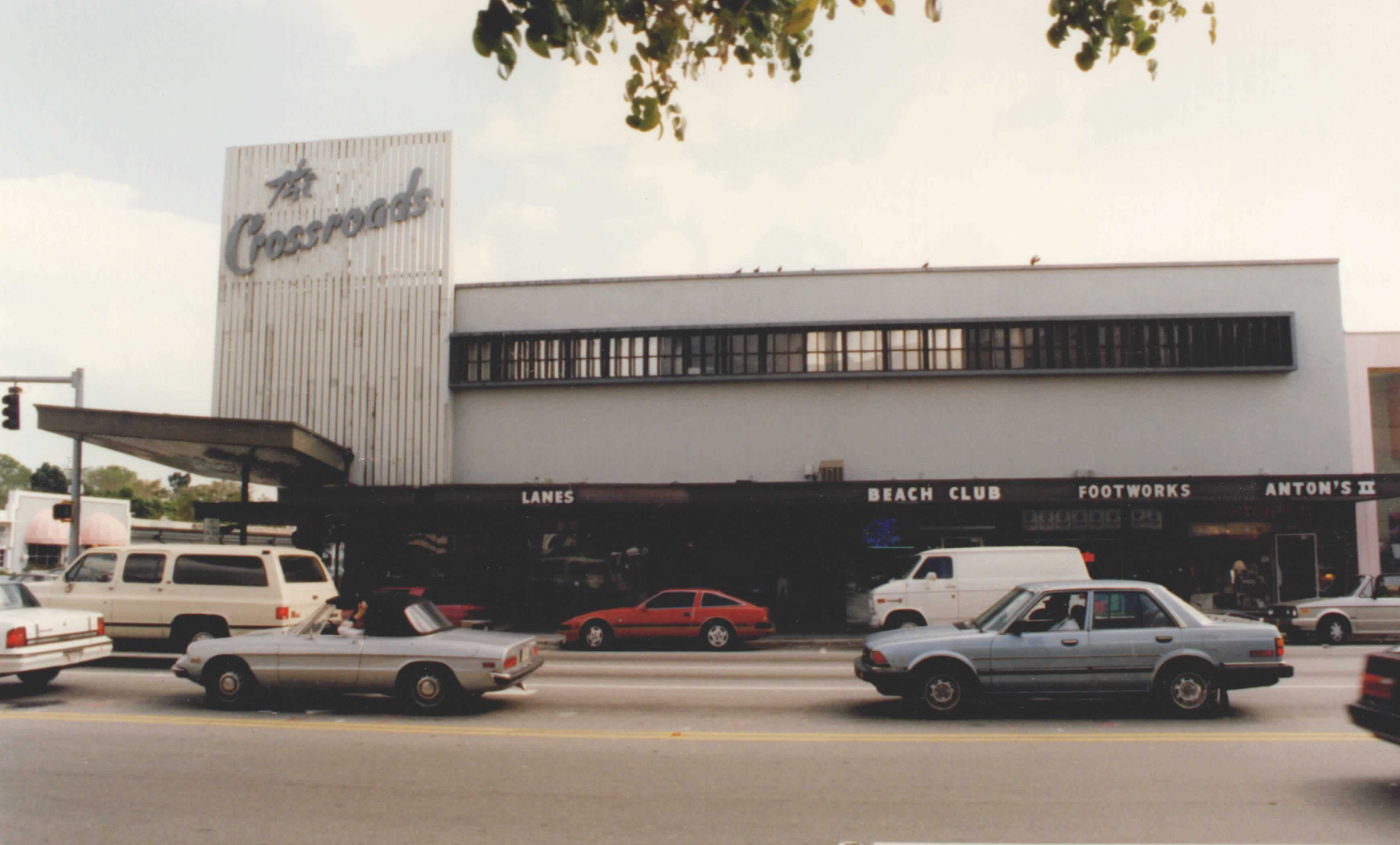 Expanded opportunities for consumers in “downtown” South Miami were envisioned by Wiltex Properties who hired Sherman to design a “state-of-the-art” shopping complex. The building would offer a series of shops on its two primary locations at Red Road and Sunset Drive.

The building’s first floor was designed to accommodate 12 shops; the largest at the northeast corner. Shops had a mezzanine level at the back in which to display merchandise.  The second floor was divided into office spaces.  There was one elevator and air-conditioning (considered a modern luxury at the time).

Tony Sherman designed a building with a cantilevered canopy atop which was constructed a large tower-like affair that served to display the name of the shopping center in large letters.

The parapet-like arrangement of the false tower was originally made of vertical redwood planks that corresponded to the redwood louvers set into the projecting window frames running horizontally around the top of the building.  Planking purportedly decorated the canopy but, like the tower, this planking was eventually removed.  The tower was not solid. It was a series of vertical boards that continued down either side of the canopy, ending at the building’s brow. A set of fins running vertically on the eastern elevation added another “modern” element that helped to balance some of the mass of the tower/canopy entrance have also been removed. The effect of Sherman’s design was to transform the false tower into a giant signboard – one which was readily visible from a moving vehicle — heralding the shopping center and the heart of downtown.

Over the years, some changes have been made to the Crossroads Building that include remodeled storefronts, renovation and tower sign replacement.  The flat awning evident in the early photograph was open in some areas to allow palm trees to grow up and beyond the line of the awning. This straight consistent line was in keeping with the streamlined look of the building and has since had canvas awnings added to it.  However, the changes have not materially altered Tony Sherman’s original design.

The Crossroads building continues to offer retail and office space for rent and long-standing businesses such as Lane’s (original business in original space) and Footworks (Laurie Huesby’s father was a tenant and the original owner of the business) continue to prosper at the location. The building was home to Armand the Tailor until his retirement last year. Other businesses on the second floor include a dental lab, a nail salon, and the office of a Chemical Engineer, among other establishments.

Daphne Harz, Property Manager for the owner, Louis Jepeway, discussed some of the changes to the building’s exterior during her decades-long tenure. In 1989 and 1990, the wooden-slated tower was removed and rebuilt of a concrete and fiberglass material. When the planking was removed, the bands of louvered windows by the canopy became more visually prominent. In 1999 new awnings were installed around the entire building (except for the canopy area).

Photographic evidence for the Crossroads Building continues to be difficult to come by, so it remains something of a challenge to date when certain features were added and others removed. Despite these changes the building maintains its significance as a Mid-Century Modern structure designed by an architect of note. It received local historic designation on January 22, 2008 by approval of the City Commission of the City of South Miami. The Crossroads Building will stand as a pleasant reminder of post-war American optimism in the City of South Miami.