You are at:Home»Volume XI»AUGUST/SEPTEMBER 2016»PAUL MARCELLINI – PHOTOGRAPHER
By Donna Shelley on August 2, 2016 AUGUST/SEPTEMBER 2016, In The Spotlight, Topics, Volume XI
Paul Marcellini’s stunning photographs of South Florida’s National Park lands will be featured in SOMI Magazine’s continuing series celebrating the 100-year anniversary of the National Park System over the next several issues.

Paul Marcellini is a fifth-generation Floridian and second-generation Miamian. He grew up in the Redlands, just a stone’s throw from Everglades National Park. The Everglades was the place where he first discovered his artistic abilities, honing his skills as he moved from painting to photography.

“I always need an artistic outlet, and I always focus on nature,” said Marcellini.

The artist graduated from Lipscomb University in Nashville, Tennessee, where he received an environmental science degree while maintaining a minor in art (for which he had a scholarship). When he returned to Miami in 2007, he began to spend a lot of time in the Everglades—often two or three evenings per week exploring and getting to understand the place. He took a job with Miami-Dade County for a couple of years working part-time as a naturalist with the Parks and Recreation department.

In 2008, Marcellini won the Grand Prize in the Outdoor Photographer Magical Adventure contest to go on a 10-day photo safari of Kenya. The prize was a $17,000 travel package that proved to be a life-changing experience for the artist. His winning photograph was taken in the Everglades capturing a certain quality of light as he was running away from an approaching storm.

Marcellini has worked diligently at his craft since graduating college, and in 2011 finally took the plunge to move away from a steady paycheck and to earn his living as a professional artist. He sells his work online and at art shows. His art has been shown at many local galleries and museums, including the Biscayne National Park visitor’s center and a permanent installment at Miami-Dade International Airport. He is currently fulfilling an order for 25 pieces of his artwork for a large dental office in Tampa.

“I am building my inventory of photographs, and I keep covering Florida, but I also have a repertoire that includes Iceland and Kenya,” said the artist.

Earlier this year, Marcellini was informed that his photograph of the Everglades, “Path of Light,” was chosen as one of 16 images to commemorate the 100th anniversary of the National Park System as a “Forever” stamp. 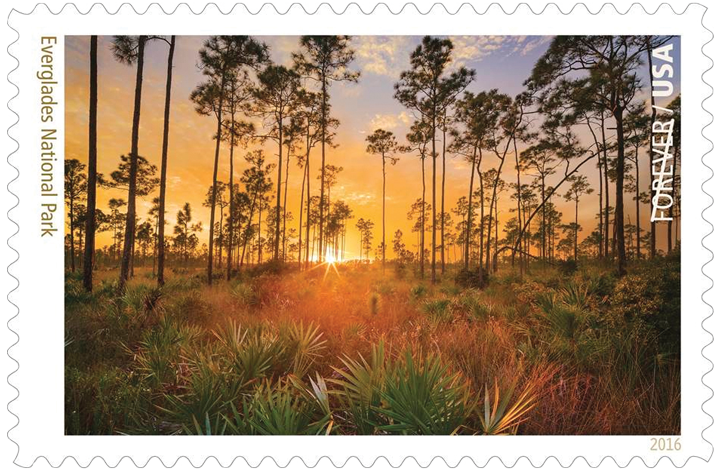 The Everglades National Park comprises 1.5 million acres from Miami to Naples and south to the Florida Keys. The park was established in 1947 to conserve the landscape and to prevent continued despoliation of the land, flora and fauna. Once flowing from the Kissimmee River to Lake Okeechobee and southward to Biscayne Bay, the Ten Thousand Islands, and Florida Bay, the slow-moving sheet of water covered about 11,000 square miles.

It is this land that Marcellini studies and successfully portrays in his photographs. He is concerned to educate the public about the natural environment and to teach them that Florida is more than just beaches.

“I wish people would know more about where we are. Let’s not screw it up. I want to show what’s still good, instead of what’s wrong,” said Marcellini.

For more information about Paul Marcellini, please visit his website at .