SOUTH MIAMI PAST:
HISTORY AND ARCHITECTURE

The City of South Miami, like many municipalities in Florida, had an agrarian pioneer past in the late 19th century; a growth spurt brought about by the arrival of the railroad in the early 20th century; a period of uncertainty after the bust of the 1920s building Boom; a post-World War II revival; and decades of the development of a commuter suburb within the axis of an ever-growing metropolis (City of Miami).

At the beginning of the 20th century, when the Florida East Coast Railway was being built to Homestead, members of the Larkins community began to establish businesses near the new rail line that went through what was called “Larkins Crossing” (near the present day Metrorail line). A siding and a very small depot were added creating a station of sorts and a freight train came through every week, beginning in 1904. John Dowling opened a commissary near the crossing on what would later be called Sunset Drive, selling supplies to workers constructing the new rail line to the south. 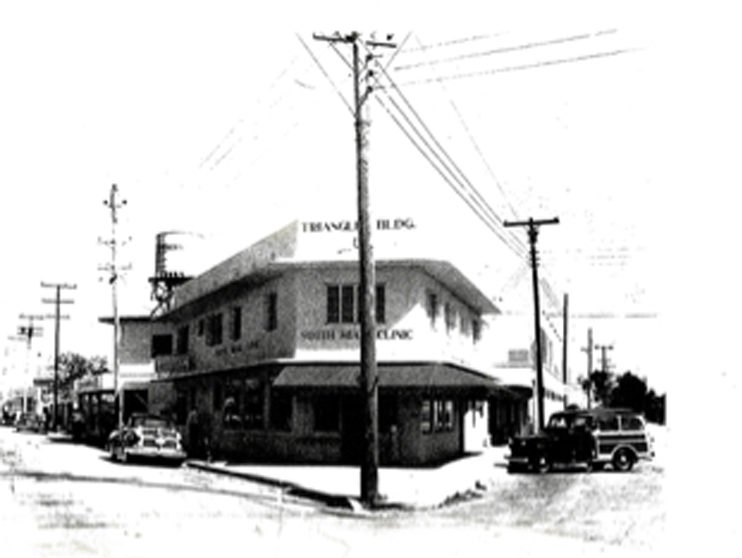 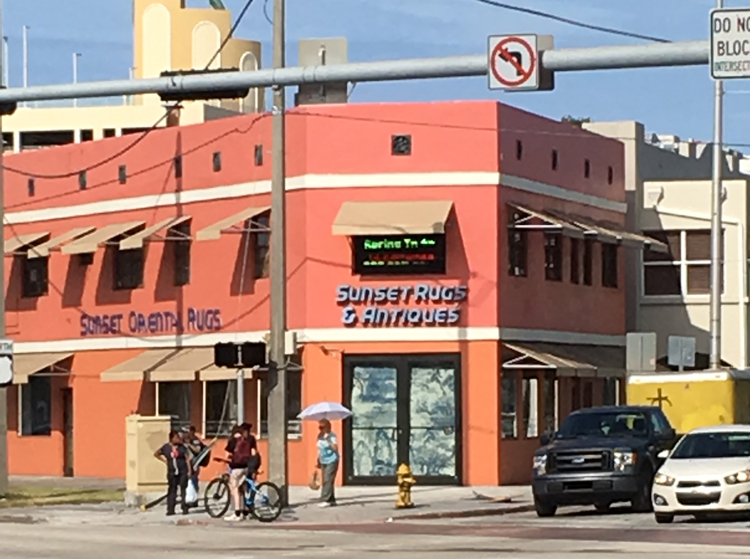 More businesses sprang up by the railway after the surface of the main dirt road (the future Sunset Drive) was improved with compacted with crushed lime rock. Mr. Larkins purchased 20 acres east of the line, building a packing house and moving the post office there. The location was approximately where the historic Dorn-Martin Drugstore is at 5900 Sunset Drive. Pioneering families such as Dowling, Opsahl and Red constructed commercial buildings and operated businesses in the Town of South Miami (previously the Town of Larkins) during this period.

Four buildings conclude our look at the historically designated sites in South Miami’s town center. The D.J. Red Building and 5800 Sunset Drive are examples of the Mediterranean Revival style. Built in 1923 and 1929 respectively, they reflect a design aesthetic that was popularized chiefly by the San Diego Panama-California Exposition of 1915-1917 which celebrated the opening of the Panama Canal on August 15, 1914. In Florida, the style was spread by architects such as Addison Mizner in Palm Beach and August Geiger in Miami. The Miami News and Metropolis building now known as the Freedom Tower, is an example of the Hispanic influence in American architecture as interpreted by the architectural firm of Schultze and Weaver. Built in 1925, the tower is modeled after the Giralda in Seville, Spain. 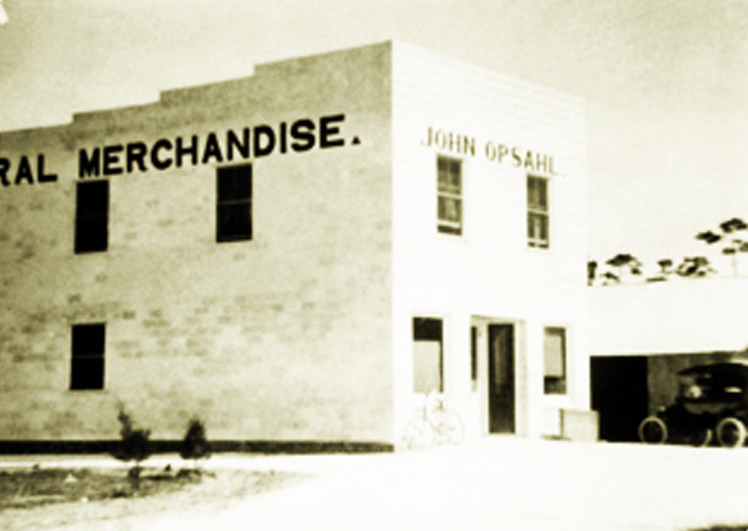 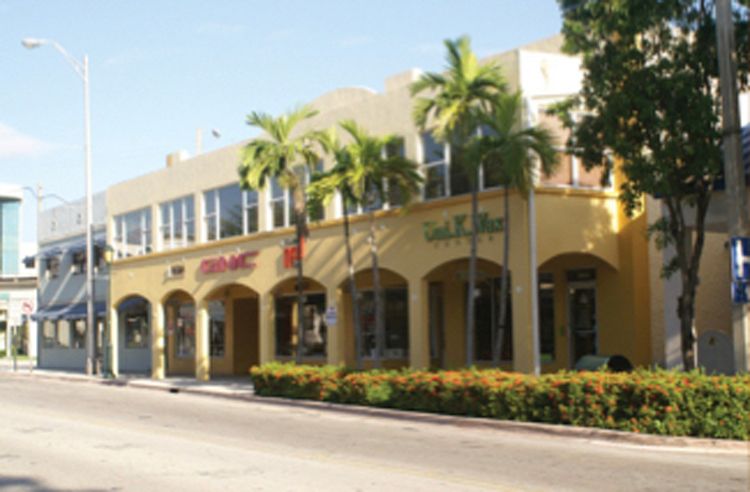 Mediterranean Revival was all the rage in the 1920s, spread by popular culture, magazines, and the motion picture industry. It was used as movie set decoration and was a favorite choice among actors and producers who purchased or commissioned homes patterned in the “Spanish” style. This architectural character defined Miami and the surrounding communities in the 1920s building Boom. Inspired by a mix of Spanish, French, Italian, Moorish and Byzantine designs, the Mediterranean style employs stucco walls, red tile roofs, wood brackets, balconies, tile and terracotta applied decorations.

The Red family moved from Oklahoma to Larkins in 1914. They settled on the outskirts of town, built a home and grew tomatoes. D.J. Red served as City Commissioner in 1931 and City Clerk from 1932 until 1936 when Sylva Martin replaced him as City Clerk.

The D.J. Red Building is located at 5850 Sunset Drive on land that was platted in 1915. It is of masonry construction with large expanses of stucco wall areas. The parapet that rises in the center forms a pediment that is flanked by tile coping. The elevations terminate on each end with the parapet rising to the height of the pediment’s peak in a straight line. The windows are modern replacements. The building was designed to accommodate living quarters on the second floor and retail shops on the first or ground floor. Another section was added by son Jesse Red in the 1940s that extended the building along SW 58th Court. The newer addition once served as an automotive shop. Subsequently, the site often housed popular restaurants such as the Waffle Shop in the 1960s and JJ’s American Diner in the 1980s. 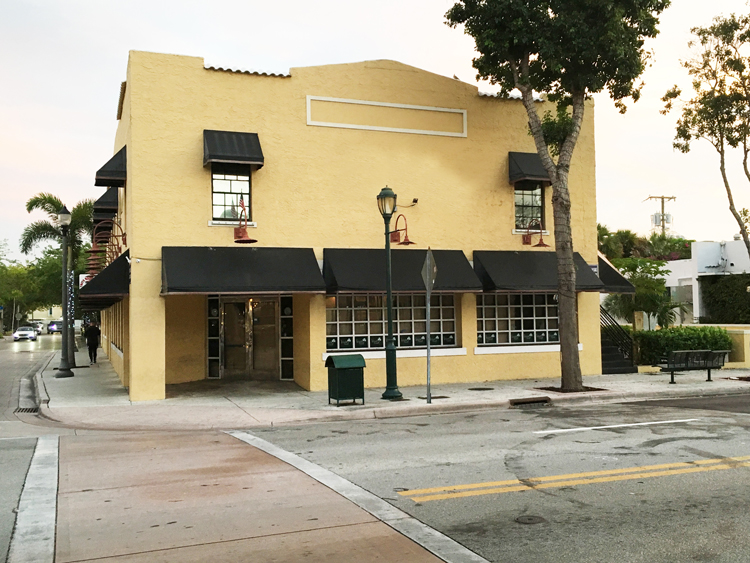 The building at 5800 Sunset Drive was erected in 1929 on land owned by the town’s founder, Wilson A. Larkins. Although altered through time, most notably, the windows and storefronts, it is an example of the Mediterranean Revival style with its regularly spaced window placement, prominent parapet, raised stucco banding around the windows and parapet, and stucco finish. The east side of the two-story structure is faced in slump or Roman brick, an unusual treatment.

The Dowling Building at 5875 Sunset Drive is rendered in a Commercial Masonry Vernacular style with ground floor arcade and a second floor that originally served as apartments. The John Opsahl family moved to Larkins from Minnesota in 1911. Mr. Opsahl built a concrete-block store in 1914 that would be incorporated into William Manning Dowling’s 1926 mixed retail and residential building. Dowling’s additions enriched Opsahl’s more utilitarian design with an arcade, a curved and crenelated front parapet, and a screened porch above the arcade. In 1994, significant alterations were made including the addition of windows to the porch; the apartments made into offices; the crenellations removed; and the arches reshaped.

The triangular building located at 5893 Sunset Drive was designed by architect E. J. Newby and dates to the Post War period, ca. 1948. Built for Mr. A. MacDonald, the structure is remarkable for the fact that it was literally wedged into a lot that measures 57.6 x 70 feet. One historic photograph shows that the building did not have banded stucco courses as it does currently, on the exterior instead there were prominent projections that wrapped around the building on the first and second floors, just above the windows to provide shade. This style of exaggerated “brows” is reminiscent of an architectural style that was popular in the 1930s called Streamline Modern (even though there is no inclusion of the typical curved shape of Streamline). At some point in the life of the building the projections were removed. This building and the assemblage of Dorn buildings directly across Sunset Drive serve to announce the eastern entrance to South Miami’s downtown.