SOUTH MIAMI PAST:
HISTORY AND ARCHITECTURE
THE SYLVA MARTIN BUILDING

The Community House was the center of civic life in South Miami. Set in shady grounds where supervised play was arranged for children, the building was equipped with auditorium, stage, dressing rooms, complete with kitchen
and sanitation facilities.

-Paul U. Tevis, History of the City of South Miami 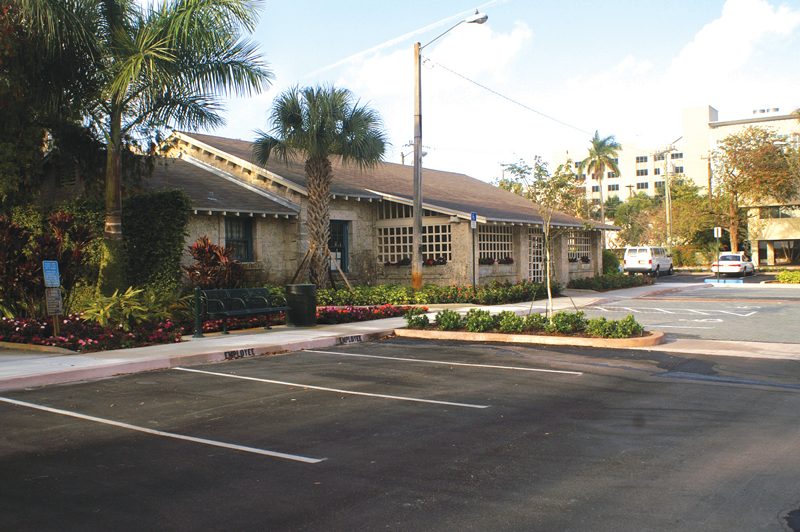 On Sunset Drive, South Miami’s Mid-Century Modern City Hall stands in sharp contrast to the old Community Center’s folksy bungalow. Later named for City Clerk Sylva Martin, the building was one of many such community gathering sites constructed during President Franklin Roosevelt’s administration in an effort to provide jobs while improving the national infrastructure during the 1930s.

At the time the building was constructed, the city had a population of about 1,500 and was a location remarkable for its tomato and citrus packing plants. The building has the distinction of being the only historically designated structure owned and maintained by the City of South Miami. Initially built as a Community Center in 1936, the venue has variously served as a meeting place for clubs and fraternal organizations, hurricane shelter, polling place, World War II USO-style entertainment center, public library (1958-1977), and community center.  Today it houses city administrative offices.

According to Paul U. Tevis (past mayor and councilman), South Miami’s city Council, as it was then known, passed an ordinance dedicating land for a community center early in 1935. The Council sought assistance from the federal government under Works Progress Administration (WPA) for the construction of the center and appropriated $2,350 for the center’s construction.  The cornerstone was laid August 20, 1935 and the Community Center was formally opened on February 3, 1936. 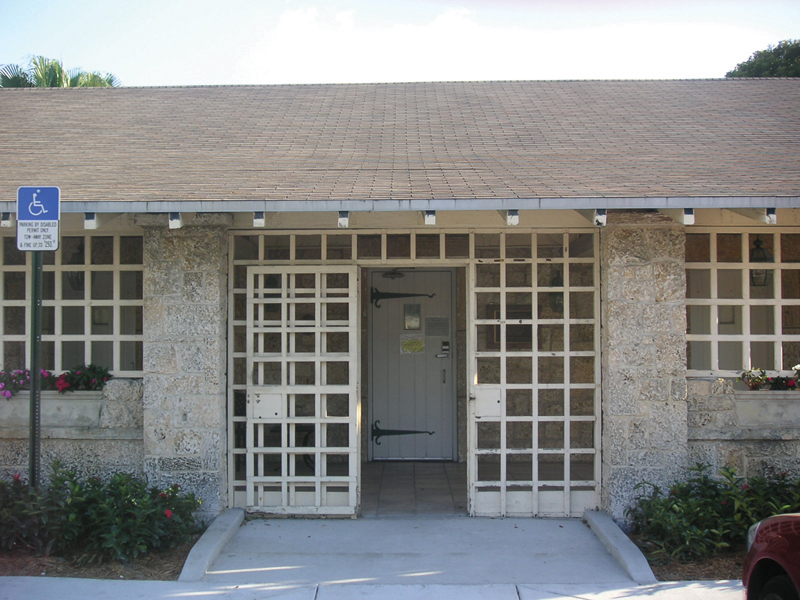 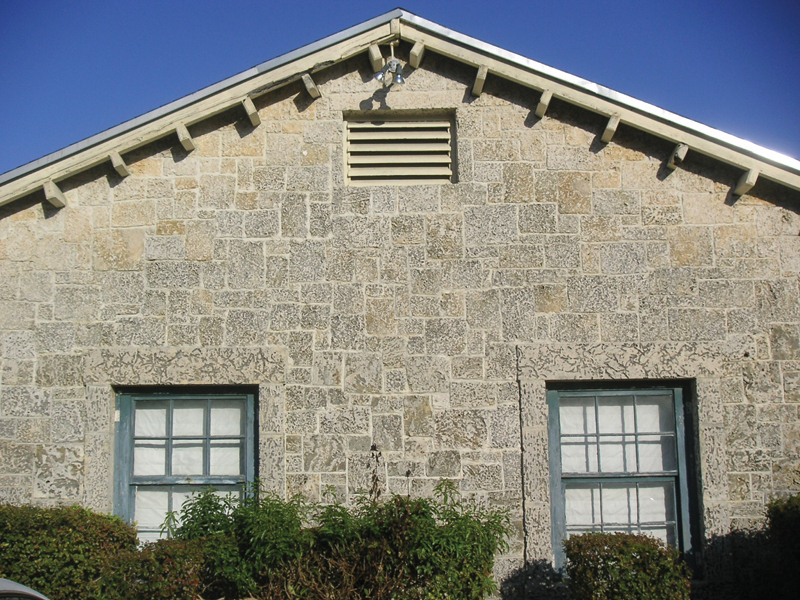 The WPA (formerly Federal Emergency Relief Administration) was among a number of federal programs established in response to the ravages of the Great Depression. The Miami region benefitted from this program with such projects as the Miami Beach Post Office, Miami Shores Golf Club, Coral Gables Fire Station, Shenandoah Junior High School, and the Coral Way Elementary School, among others.

South Miami’s Community Center tapped into the federal programs concerned with strengthening community through parks and the Federal Art Project. The building was constructed by the government using local materials as much as possible and was embellished with bas reliefs designed and cast by artist, Joan van Breeman.

Blurry photographs in the State Archives of Florida show the land being cleared and the partial construction of a building referred to as the “lodge.” Sited among pines and newly planted cabbage palms, the wooden building incorporated local oolitic limestone blocks on the exterior.

Ceremonies for laying the cornerstone featured a celebration sponsored by the South Miami Chamber of Commerce complete with a baseball game, parade, entertainment by local singing groups, a street dance, and inspection of the new fire-fighting equipment (South Miami once had its own volunteer fire department).

Architectural plans for the building have yet to be located, but city records indicate that a FERA engineer presented the plans to the city council along with cost estimates; there is no information available about the architect. Meeting minutes record that the Rinhart-Vernet Company supplied the lumber and other building materials. American Terrazzo Tile and Marble Company installed the terrazzo flooring and Mr. Royce supplied the cut stone for trim elements at a cost of 25 cents per cubic foot. Opened soon after construction, the facility was later dedicated to long-time City Clerk Sylva Martin. 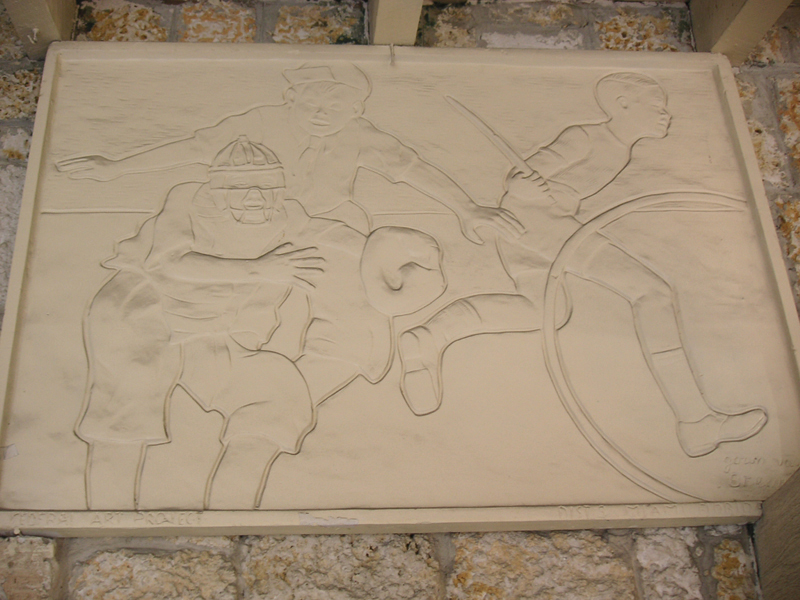 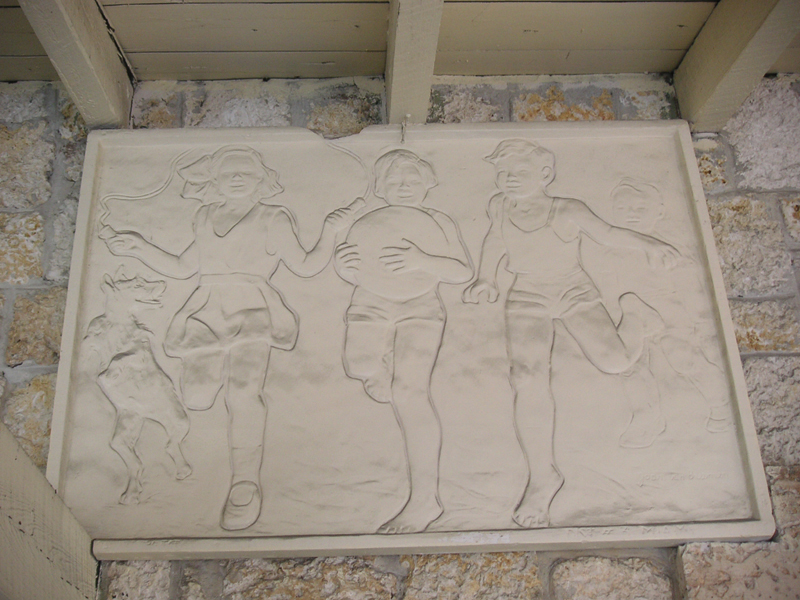 The Sylva Martin building is a one-story masonry structure, built in a rectangular plan inspired by the simple bungalow. The high-quality stonework is its most notable feature with wall surfaces fashioned from local oolitic limestone, cut and finely laid in irregular courses.  There are five bays across the front; a porch bridges three bays. A gable roof covers the main portion of the building with shed roofs over the front and rear porches.  Four square piers of oolitic limestone support the front porch roof. The space between the porch piers is in-filled by low oolitic limestone walls and those at the central entrance bay have cast concrete flower boxes. The front entrance is centrally located and has three doors of vertical wood panels. Windows are double-hung sash with wood frames, some with 6-over-6 lights.  All windows and doors have slightly projecting stone surrounds.  There are slightly projecting stone quoins on all four corners of the building. The original fireplace continues to grace the interior, despite many changes made to the building as it transitioned from gathering place to its current role as government offices.

Joan van Breeman, a Florida resident, created a series of bas reliefs for WPA construction projects in southeast Florida and the Florida Keys showing children engaged in recreational activities. Entitled “Children at Play,” this series of artwork was placed in over 127 libraries, public schools and public buildings. The Sylva Martin building has two such bas relief cast panels above the central doorway. The series of reliefs has a white plaster of Paris finish and with surface carving. Most measure about 48” x 34”. The extant examples were designed for the interiors of buildings, yet it appears South Miami’s pieces were mounted on the exterior, seemingly protected by the porch roof.

The Sylva Martin building is a unique structure in the cityscape, worthy of continued care and preservation. It has earned its place within the city’s small inventory of historically-significant buildings. It is remarkable for its history as a successful public project and as a gathering place for a growing community. 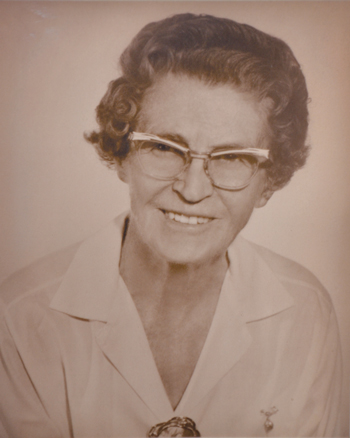 Sylva (Graenicher) Martin (1896 – 1988) joined her parents in South Miami in 1917 at the age of 21. Among the first settlers in the town of Larkins as it was then known, Mrs. Martin told a Miami Herald reporter in 1986, “After 79th Avenue and Sunset, there were just bullfrogs and tomatoes.”

Sylva Martin’s parents, Sigmund (a Milwaukee surgeon) and Louise Graenicher, came to Larkins in 1916, clearing land for their home on a ten-acre site near Sunset Drive and Ludlam. Period photographs chronicle a South Miami with tall pines and scrub as far as the eye can see; and at the Graenicher home, flocks of chickens.

In 1936, Mrs. Martin became South Miami’s first woman City Clerk and served in that capacity for more than 20 years, as well as tax assessor, tax collector and clerk of the municipal court.

In 1979, upon the dedication of the Community Center in her honor, she said, Today my fervent hope is that this building…may become the cornerstone of our tradition, for we have nothing else so concrete and full of memories and local history, and that it therefore may be honored by becoming a historical building.