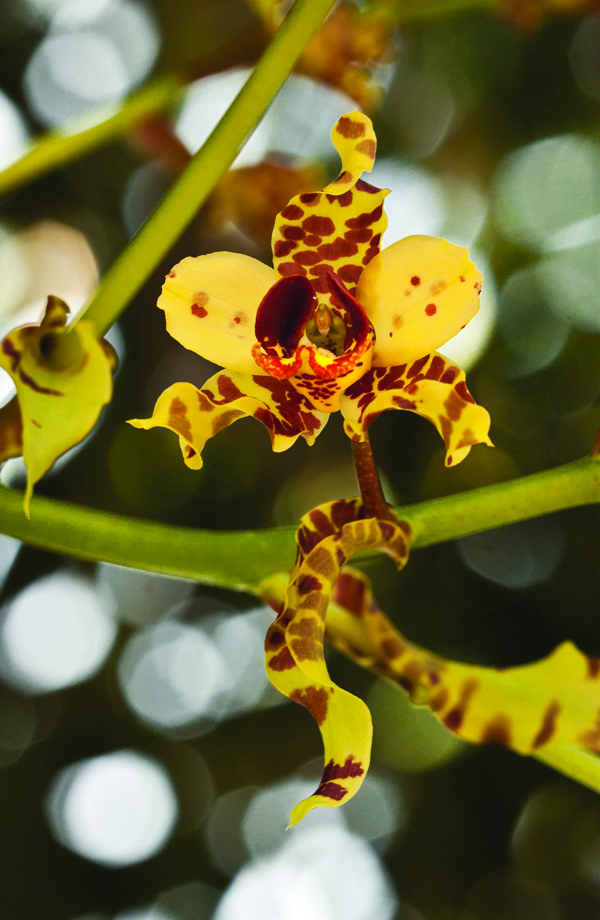 Fairchild Tropical Botanic Garden is on a mission to plant millions of native species of orchids into some of the most population-dense areas of south Florida. In an effort to return to our environment orchids that grew here abundantly about 100 years ago, FTBG launched the Million Orchid Project in 2013. The project relies on the combination of science, education, and conservation while working with volunteers, schools, businesses, and municipalities to reintroduce a population of native orchids healthy enough to thrive all around us. Florida is the ideal research laboratory for this ambitious project becauseit is home to about half of all orchid species in the country.

Orchids make up the Earth’s largest group of blooming flowers and are found all over the world (except Antarctica). There are over 25,000 different types of orchids that attach themselves to other plants such as trees or grow on the ground. They have been on the planet for over 100 million years, much longer than our hominid ancestors who date to about six million years ago.

South Florida orchids once grew in great abundance on oak and mahogany trees however with the arrival of the Florida East Coast Railway in the late 19th century, the orchids became a commodity. Taken from their natural habitat and transported to flower shops by the millions, their numbers dwindled. As south Florida became more developed and increasingly urban, conditions such as nutrients and pollinators were altered or eliminated to such an extent, that the native orchids disappeared. 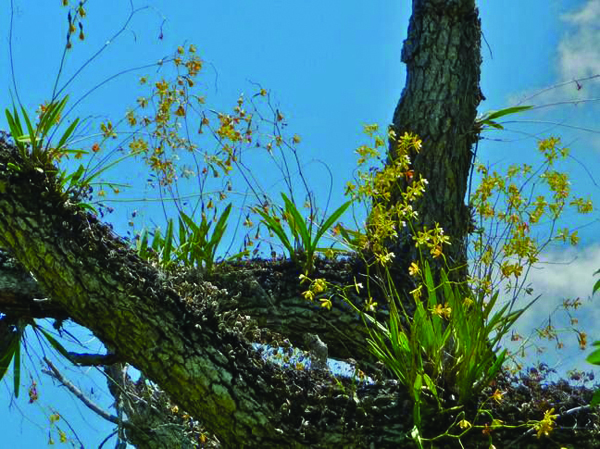 It is this that the project addresses. The native orchids cannot make a comeback by themselves and require assistance through propagation that begins in Fairchild’s recently-constructed Micro-propagation Laboratory where the orchids get their start from tiny seeds. The seeds are germinated in test tubes until they are strong enough to be moved to a greenhouse, after they reach a certain size, they are put in trees in communities and schoolyards with some going to federal and state-managed natural areas throughout the county. 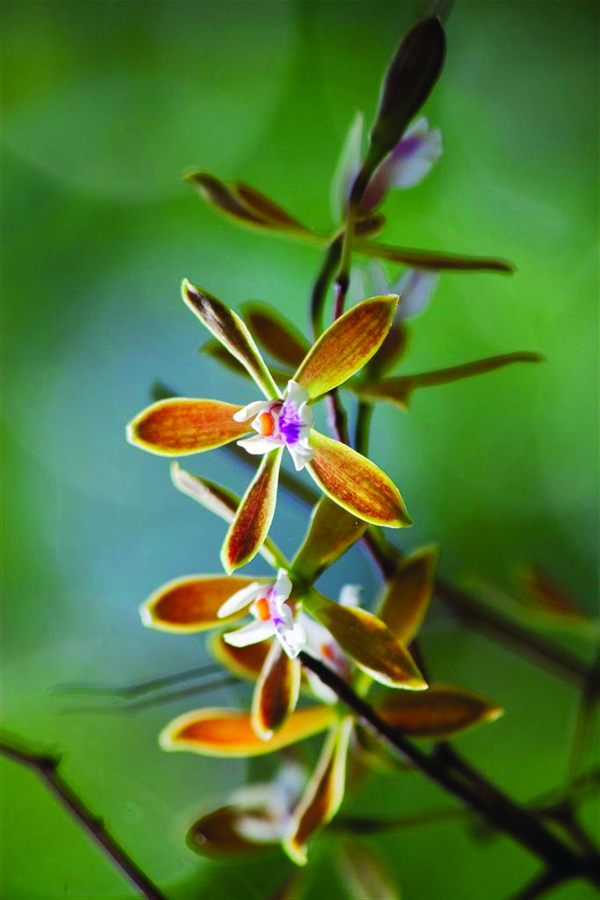 Orchid seeds, akin to a fine dust are dispersed by the wind. The seed develops into a plant if all the proper conditions of surface, nutrients, and growing conditions are met. Florida’s orchids arrived as seeds borne on winds from the Caribbean, Central and South America, and Africa.

The project is modeled on Singapore Botanic Garden’s successful 30-year project of propagation and reintroduction of native orchids in trees within the city. SBG has achieved Fairchild’s goal to establish orchids that eventually become capable of reproducing without human assistance.

Fairchild set a timeline of five years to get orchids propagated and into trees. Now, four years into the project, they have seen a lot of progress in that regard. According to Dr. Jason Downing, Orchid Biologist, it is two years from seed to a plant large enough to go out into the community. Thus far, 85,000 plants have made it into the communities. They were ready to add another 20,000 this year until Hurricane Irma came along and destroyed the shade and green houses at the Fairchild garden. Once in the trees, survivorship has been 50 to 60 percent, thanks to a number of variables. Dr. Downing says that the project is one large living experiment that they are learning from as they go. Pollinators to help the plants along may no longer exist in the environment. Issues such as spider mites at Fairchild, or squirrels eating orchids in Coral Gables, or Iguanas snacking on them is the City of South Miami, have had an impact on the term-term success of some of the orchids.

“As one big living experiment, we are going to discover if the orchids can even survive on their own in our highly urbanized environment,” said Dr. Downing.

There are success stories. One such is the Cowhorn orchid (Cyrtopodium punctatum) at the Jose Marti MAST Academy in Hialeah. Teacher Andrew Kearns has spearheaded the program at the school, working with his students to realize a 90 percent success rate with this type of Florida native orchid.

SCIENCE, TECHNOLOGY, ENGINEERING AND MATH MOBILE LAB
“So many students are getting an opportunity for special experiences in science and conservation through the Project.”
~ Dr. Carl Lewis, Director, Fairchild Tropical Botanic Garden 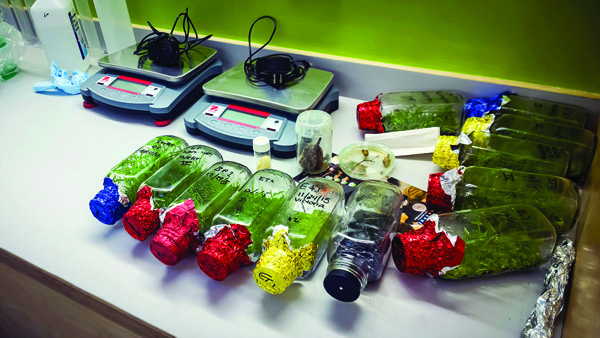 Orchid flasks in the STEMLab 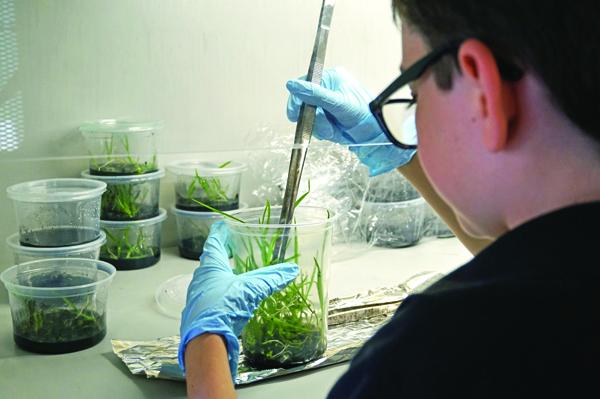 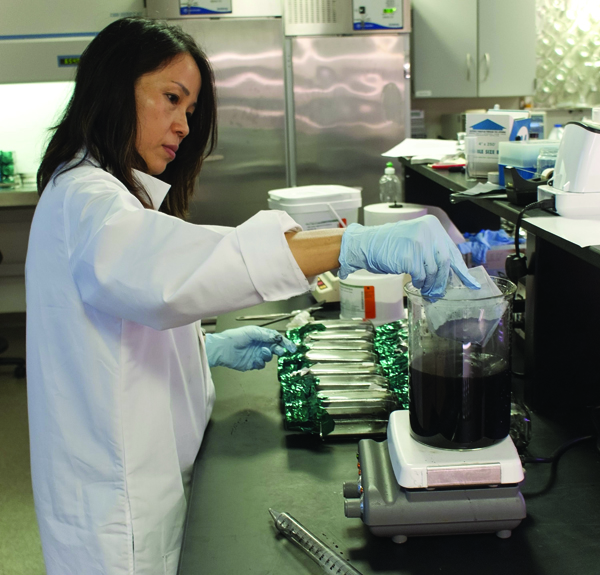 Under the auspices of the Fairchild Challenge, students and their respective schools have and continue to be a critical force in the Million Orchid Project. One hundred schools with 85 percent participation by the students have been involved to date. During the project, Fairchild began to run out of room in its micro-propagation lab. Working with area schools, much of the nurturing and planting is in the hands of students and their teachers. Then, along came another solution in the form of a mobile STEMLab.

It began with an old school bus donated to Fairchild by the Miami-Dade County Public Schools (M-DCPS).  Another partner, the University of Miami School of Architecture, Design Build Program transformed the school bus into an ADA-accessible state-of-the-art mobile botanical propagation lab. Seventh grade students about 60 in a day, work in the lab outfitted with two laminar flow hoods, an autoclave, reverse osmosis water, photovoltaic power, a generator, air conditioners, refrigeration, plumbing, electricity and safety equipment. Beginning in fall 2016, the lab started traveling to some of the County’s under-resourced middle schools. Instead of being transported to Fairchild, Fairchild’s lab was able to travel to the school.

The STEMLab engages students in all aspects of the research: planting seeds, transplanting seeds in sterile conditions available in the STEM Lab, nurturing seedlings in their classrooms and collecting and analyzing the data. When the orchids are ready, the students plant them in trees around their schools where they can continue to observe, monitor and record ecological interactions. The program brings to middle school students access to a lab that they would typically not encounter until they reached the university level.

According to M-DCPS, “Through STEMLab, students and teachers will collect, aggregate, and analyze significant publishable scientific data; and the students will be given the opportunity to devise their own research questions and test hypotheses that will advance the program in unexpected directions thus putting local conservation and the future of our community directly in the hands of school children.”

Of the STEMLab students Dr. Lewis said, “I love that conservation happens right around them. The students have shown respect for the endangered plants and know they are responsible for the success of the cultures in their charge.”

VOLUNTEERS, PROGRESS, AND THE FUTURE
From the beginning of the Million Orchid Project, Fairchild’s body of steadfast and hard-working volunteers has helped to make the project a success. Dr. Downing revealed that there was something of a secret hiding among many of the female senior retiree volunteers: 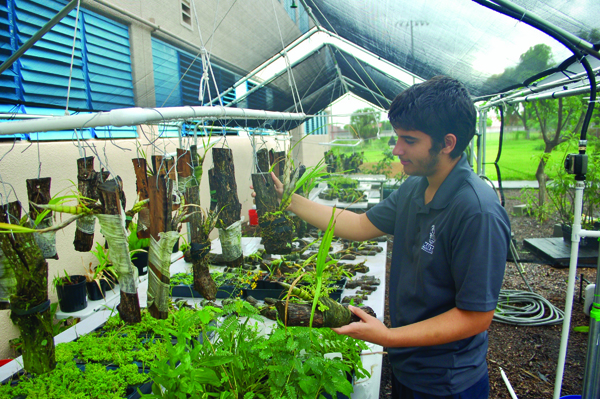 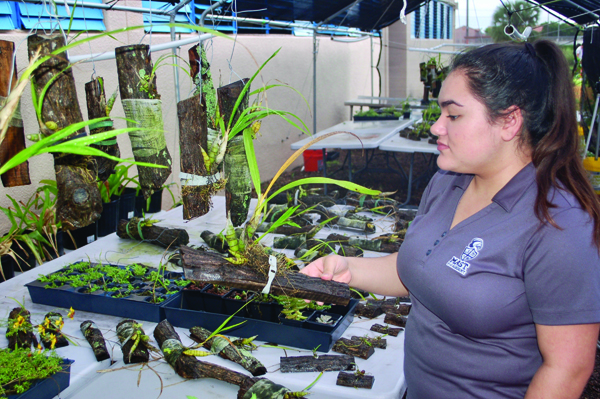 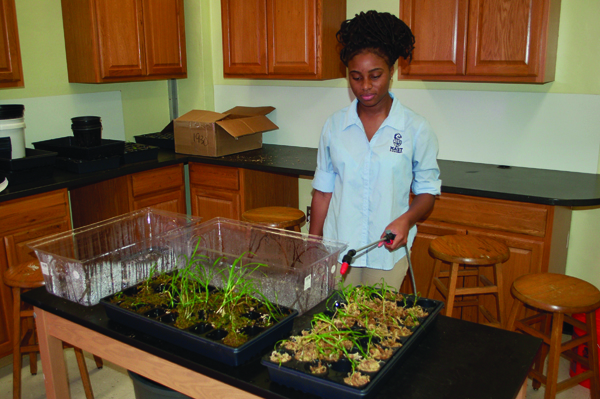 They took to the project so quickly and demonstrated an aptitude for the work. What we discovered was that many of the women held degrees in the sciences but had not had the opportunity to act on what they learned because they had gotten married and raised children right after graduating. They literally blossomed and their inner-scientists emerged.

The orchid lab in the DiMare Science Village at Fairchild has been successful with the propagation and growth of four types of epiphytes: Florida butterfly orchid (Encyclia tampensis), Cockleshell orchid (Prosthechea cochleata), Dollar orchid (Prosthechea boothiana), and Cigar orchid/Cowhorn orchid (Cyrtopodium punctatum); and two terrestrial species: Pinepink (Bletia purpurea) and Dancing lady orchid (Oncidium ensatum). Pinepinks have been distributed to elementary and middle schools and many were planted throughout parks in Coral Gables.

The program has been such a success that Fairchild has formed partnerships with entities other than schools and municipalities. They include:  ZooMiami, Florida International University, West Kendall Baptist Hospital, Pine Jog and Tivoli Lakes (West Palm Beach), TY Park (Broward), Snapper Creek Estates, East Ridge, and Ventura Estates. 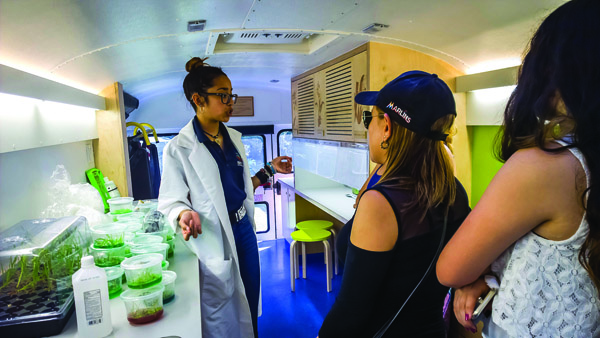 Future efforts will involve transporting what has been learned at Fairchild to other parts of the country, beginning with an entity in Washington, D.C.

Dr. Lewis would like to encourage our readership to consider volunteering to work at the lab in the garden or to work with the students in the STEMLab. As a community-wide project that stands to benefit conservation efforts and the ability to restore our native flowering plants, the Million Orchid Project is an enterprise designed to educate and return native species; it is also a program for the common good. Who doesn’t need a little of that in today’s chaotic world?