Miami continues to gain ever-greater international attention. Now we have the Underline to increase the city’s popularity by creating an urban trail that will improve the quality of transportation and the quality of life. Miami’s world-class status is well-deserved with its renewed downtown, first-rate and cutting edge museums and entertainment venues, the Design district, and luxury everything from hotels to homes. The classics of great weather, sun, sand, and water make this one of the best places on the planet in which to live, work, and play.

In South Florida, land is precious. In Miami-Dade county land set aside for parks and green space is particularly precious. So when an ingenious plan like The Underline comes along to recapture and re-purpose hundreds of acres of fallow land, it garners the attention of the public, community leaders, and elected officials.

The Underline project will restore the under-utilized land that runs below the Metrorail from the Miami River to Pinecrest. The Underline will become an essential new mobility corridor integrating public transit, vehicles, cyclists and pedestrians. It will offer a mix of new green space, revitalized natural habitats, and to quote the Friends of the Underline, “A 10-mile canvas for artistic expression.”

Meg Daly, Founder and President of the Friends of the Underline, certainly knows this to be true. Her concept for the project grew out of her need to attend her therapist’s office after she broke both elbows as a result of a biking accident. Because she couldn’t drive, she used public transit and walked the M-Path under the Metrorail; she came to appreciate the land beneath her feet. Meg thought that the M-Path could offer so much more by invigorating the community and providing a safer form of mobility.

Perhaps it was a combination of Meg’s vast experience as a successful marketing entrepreneur, or her connections in the community, or just her amiable character–the Underline idea caught on rather quickly.

“I talked this up with the county, Parks and Recreation, Planning and Zoning, and the Transit Director (who loved it),” said Meg. What she thought was going to take 10 years, has fast-forwarded to about three.

Meg’s organizational goal was to make the Underline project one that was wholly owned by the county; it is their land after all. When she began her talks with the county two years ago, the land beneath the Metrorail was already a part of the Park’s Master Plan. It is also part of her goal to have the community embrace and take part in the development of the project. “There are a lot of stakeholders; this requires a robust public process,” said Meg.

The Vision Explored
The Underline is envisioned as a ribbon of green running the length of the Metrorail’s route between Brickell and Dadeland South stations.  Preliminary concepts for the project were developed free-of-charge by University of Miami students from the School of Architecture, under then-interim Dean Denis Hector, which greatly helped to define the vision.

Public meetings brought the various stakeholders together to contribute ideas for the development of the Underline. And from it came the very real need to have the project provide a method to integrate transportation. The plan is not all about pretty pictures and greenery, but about the necessity to greatly improve Miami-Dade’s statistics when it comes to traffic congestion and the safety of pedestrians and cyclists.  At a recent “Bike to Work” day kick-off, County Mayor Gimenez said, “Cycling is an alternative method of transportation and the Underline is proof of our commitment to this.”

The project will have an impact on the communities and municipalities in which the M-Path is located, bringing improvements to eight transit stations. Each location will have its own design. Included are segregated trails for pedestrians and cyclists, vita-courses, trees, shrubs, water fountains, seating, public art, and perhaps a farmer’s market at Brickell. The M-Path will be straightened; 28 intersections will be re-engineered to maximize safety for all users and for vehicular traffic; and lighting and other safety features will be added. 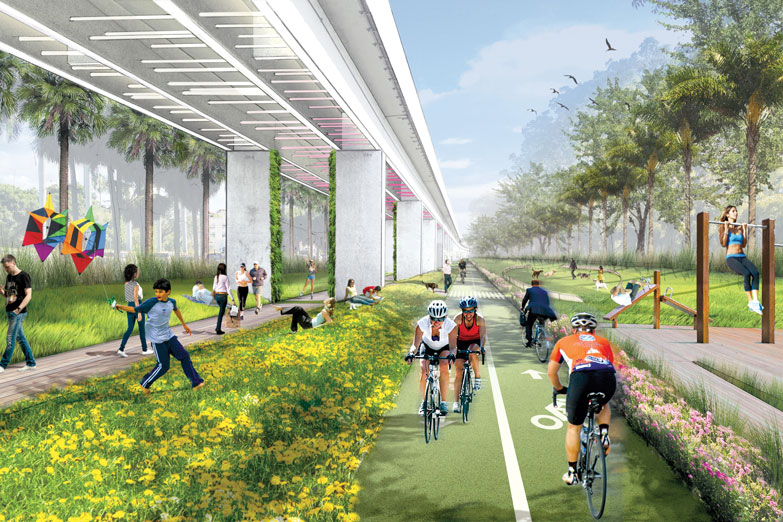 Linear Parks, Progress and Funding
The Underline mirrors such projects as the Promenade Plantée in Paris (1988) and the High Line Park in New York City.  These projects are popular with residents and visitors alike. In New York, an abandoned elevated railway was converted into a 1.45 mile linear park by the home-based architectural firm of James Corner Field Operations, renowned practitioners of urban design and landscape architecture in the public realm. The company is working on the new Lincoln Road master plan and was involved in projects for the PAMM and Frost museums. In a recent competition among 19 firms, it was James Corner Field Operations who got the nod from Miami-Dade County to design the Underline.

In the planning world, it is all about the studies. The Underline’s master plan was fully funded by a number of donors, from municipalities to philanthropic foundations. A study to measure the Underline’s economic impact study on property values is on the boards. It will be developed by a team of qualified professionals. Here it should be noted that the M-Path is considered a right-of-way and as such, cannot have buildings constructed on it. Additionally, thanks to Bruce Greer, President of the Fairchild Tropical Botanic Garden Board of Trustees, staff is consulting on appropriate plantings for the project. And the Miami Association of Realtors has pledged members of its organization as volunteers.

As for fundraising, again, the stakeholders are many. The Friends of the Underline organization was established in 2014 as a 501(c)3 corporation for the purposes of raising funds and providing support to the project; the Friends are also seeking funds for an endowment for the Underline’s future needs, such as maintenance and programming.  Said Meg, “We need champions. Anyone who wants to help should get on board; don’t sit on the sidelines.”

Those who have already gotten onboard with funding and/or support include: City of Miami, City of South Miami, Coral Gables, the John S. and James L. Knight Foundation, the Miami Foundation, the Health Foundation of South Florida, the Mitchell Wolfson Foundation, Baptist Health, Fairchild Tropical Botanic Garden, Miami Association of Realtors, and the University of Miami, among many others.

Why the Underline Matters
Here are a couple of sobering statistics about life in our home county: Miami-Dade leads the state in bicycle-related accidents. It is the fourth most dangerous county in the nation for pedestrians.  To what do we owe this ignominious reputation? It is a complex of issues, chief among them a lack of education about the fact that cycling and walking are both modes of transportation; and a vehicular transportation system that is constantly attempting to catch up with the speed of growth that puts thousands of additional vehicles on inadequate arteries.

The Underline will serve to mitigate some of our ills by integrating public transit with other forms of mobility. “Integrated transportation is a need, not a want,” said Meg.

Miami-Dade County Commissioner Daniella Levine Cava wrote of the project: “The Underline presents an opportunity to create a bike path that residents could use for exercise, recreation or commuting. Creating bike paths and lanes on major corridors will encourage the people of Miami-Dade County to get out of their cars by creating a safe area for riders. The Underline will serve that purpose by becoming another option to travel along US-1 and will double as a beautiful green space where residents can enjoy our county’s unique environment and engage with their communities.”

And while we are about preventing accidents and educating drivers about cycling and walking, we will be able to boast about our world-class greenway that will promote health, provide public art and demonstrate once again that Miami is the place to be.

To get onboard with the Underline, visit the Friends’ website at: .

At the start of the Metrorail service in the early 1980s, the path under the rails was a preferred route for many of the family-oriented BIKE MIAMI rides organized as part of the Greater Miami Chamber of Commerce’s Miami’s For Me civic-pride campaign.  A dedicated cyclist for decades and now publisher of SOMI Magazine, John Edward Smith created and organized the BIKE MIAMI tours to many county parks and facilities.  At first, the asphalt path didn’t have a name; several years later it was referred to as the “M-Path,” and is now recognized as part of the East Coast Greenway.  As Smith noted: “today, there is new vision and commitment to improving the quality of life along the original path of 30 years ago, and SOMI Magazine is pleased to be in the vanguard of lending our support to The Underline.”

BECOME A FRIEND OF THE UNDERLINE

Sign up at for upcoming events, activities and ways to support the future Underline.

For residents & businesses from the Miami River
to SW 26th Road

For residents & businesses from SW 27th Road to the north side of LeJeune Road.

Sign up on Eventbrite
Public meeting sites subject to change.