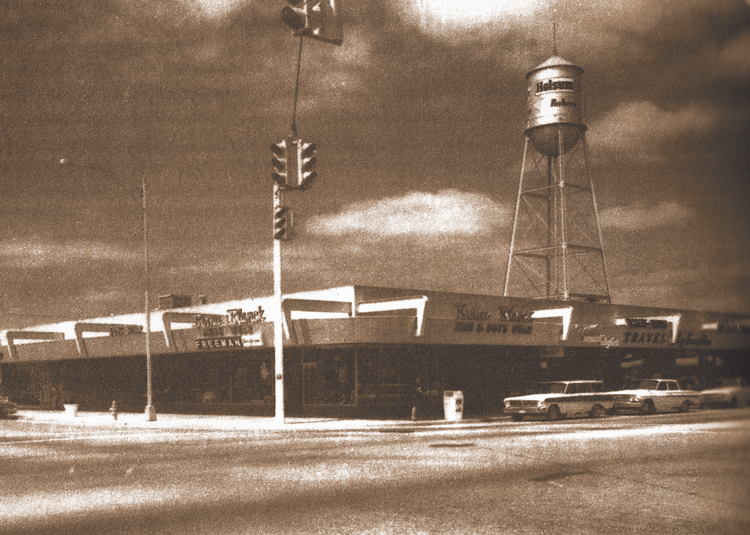 In 1934, the Fuchs Baking Company moved north from Homestead to South Miami in order to be closer to distribution markets. The bakery (later named “Holsum”) was a fixture on the city’s landscape for over four decades.  The location captured the senses –visual with the estimated 164’ high landmark water tower and the olfactory overload with the warm, comforting aroma of freshly-baked bread wafting throughout the city.

Charles T. Fuchs, Jr. moved his business to the old Riviera Theater on US 1. According to the Miami News (1938), “The bakers of Holsum took over that super-super theater and set to convert it into something more practical, a super-super bakery.” The bakery was a very successful business, and Holsum bread became, as the News reports, “The most popular bakery product in South Florida.” The Holsum Bakery grew in the state of Florida and even shipped bread to Puerto Rico, Cuba and Latin American countries.

Holsum contributed mightily to the city’s economy as one of the city’s main employers, and spurred retail business in the community in a post-WWII economic boom well into the 1950s and 60s.  We were South Miami – where town and country meet; were you could buy hay for your horse or a tux for a dinner engagement.

Charles T. Fuchs, Jr, was deeply involved with the City of South Miami and one of the charter members of the South Miami Chamber of Commerce, serving as its president for a number of years until 1954, when he died as a result of an airboat accident.   Blue Waters Park was re-named in honor of Mr. Fuchs in 1956.   It is a city park located at US1 & 80 Street, where is located the offices for ChamberSOUTH.

In the mid-1980s Holsum left the area to new quarters in Medley and the most prized and coveted piece of real estate, 10.42 acres on US1 was sold to Martin Z. Margulies, a prominent art collector and residential developer, as in Grove Isle. 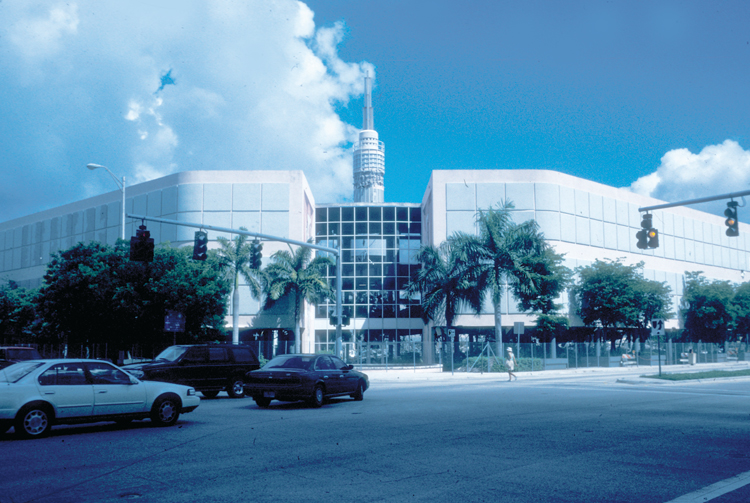 The Bakery Centre (Photo taken after the entrance steps and “Hammering Man” sculpture were removed.)

Sleepy City of South Miami lulled with the fragrance of baked bread got its wake-up call with the prospect of a major development on this prized parcel on US1 & Red Road.

In 1982, during the administration of Mayor Jack Block, the City of South Miami began to hear plans regarding a large-scale building project on the 10.42 acre site of the old Holsum Bakery.

Martin Z. Marguilies, a very successful developer of residential projects and an art collector, was selected among seven or eight developers by the Holsum property principals as the one person who could pull off the project.  “The location of the transit station and the redevelopment of the Holsum property will probably be the most important influences on downtown South Miami into the 21st century,” affirmed the developer’s promotional brochure in 1982.

At first referred to as “South Park,” the developer deferred to the renaming it as the “Bakery Centre.”  The proposed development was to have many benefits for the City of South Miami. The city’s tax base would increase by 53 percent ($504,518 in ad valorum taxes), the city would share in the estimated $65 million in retail sales; it would redevelop 33 percent of the downtown area; increase the inventory of office space by 119 percent and retail space by 98 percent, and create approximately 4,200 jobs within the community. Additionally, some $2,428,000 was planned to be spent in offsite infrastructure improvements.

The new Metrorail with a station at South Miami provided linkages for attracting customers.  The plan called for intensive mixed use, allowing for the highest development densities with a mixture of land uses including commercial, retail, office and residential. The total project was to take six years to complete and when finished would include 300,000 square feet of retail space, a 13-story hotel with 300 rooms; two twin office towers totaling 600,000 square feet proposed at a height of 28 stories, but whittled down by the Commission to an approved height of 22 stories, and a nine-story parking garage for 3,000 cars.  An elevated pedestrian bridge from the Metrorail over US1 to the project entrance at 58th Avenue was to be built at the developer’s expense for $1.5 million, at the insistence of former
Mayor Jack Block. 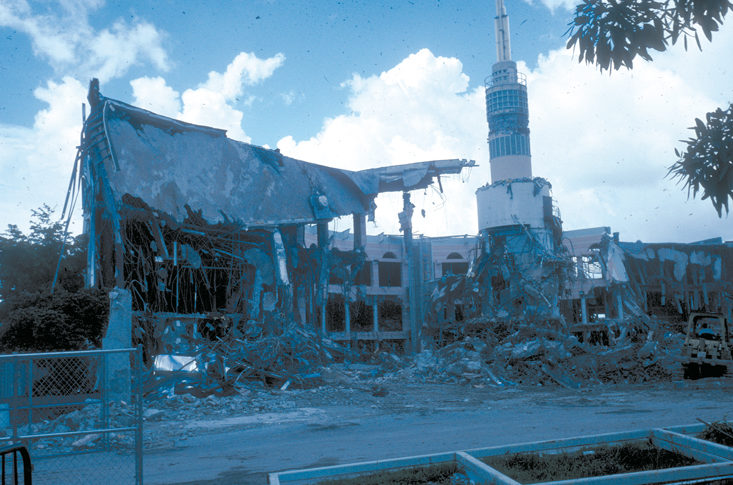 The Bakery Centre would prove a challenge for a city that imagined itself as a small town. The 1981 Comprehensive Plan provided for eight-story building heights in the commercial areas. The project was to be completed in two phases: Phase 1: the retail shops, hotel and garage; Phase 2: the twin office towers and exhibition space of 20,000 square feet.

Interestingly enough, the details for the use of retail space did not include the theaters, which turned out to be the most successful space in the development. Troublesome for the city, Officer Laverne Dan Schulz of the SMPD sustained fatal injuries as he attempted to stop a fight between two gangs at the movie theater.

The $35 million project was doomed from the day it opened. Within ten years, the planned mega-complex would be razed.  The Bakery Centre retail components were built, but it never matched the developer’s dreams.  Dadeland proved to be too much competition. Mr. Marguilies lost about $20 million of his net worth, the cityscape was saddled with the user-unfriendly “pink elephant,” the Flagler Federal Savings and Loan failed, and small business owners went belly-up. The future of high-rise developments in South Miami received the death blow from elected officials in 1989. The Comprehensive Plan adopted by the Commission down-zoned commercial properties from eight to four stories throughout the city.

By 1996 the Bakery Centre had been demolished and a new retail partner came calling in South Miami, the Comras Company and later the Simon DeBartolo Group. Their project would become The Shops at Sunset Place, which some whimsically referred to as “Son of Bakery Centre.”

THE SHOPS AT SUNSET PLACE
With the Bakery Centre leveled, the only remaining structure left was the parking garage. Work began on the new development; The Shops at Sunset Place would cover the entire 10.42 parcel, however its density was significantly less than the original Bakery Centre plans. 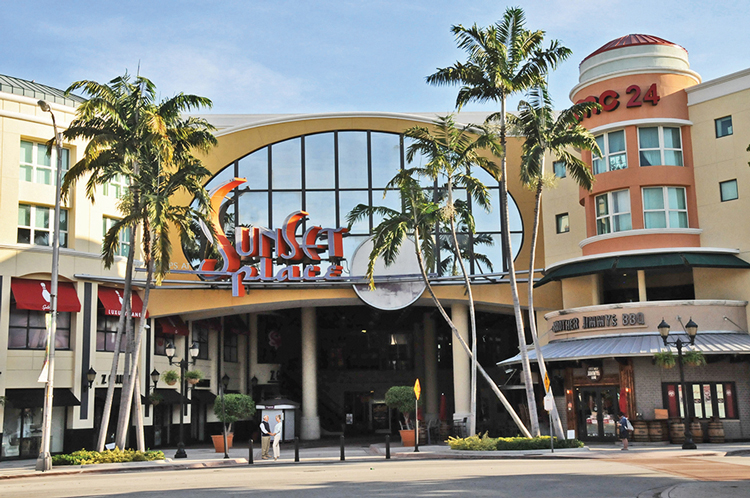 The Shops at Sunset Place

Designed by the local architectural firm of Wolfberg Alvarez the project provides for some 120 shops, restaurants and entertainment venues including AMC with 24 screens.  And a first for South Miami in such a mixed-use development 40 residential units were built. 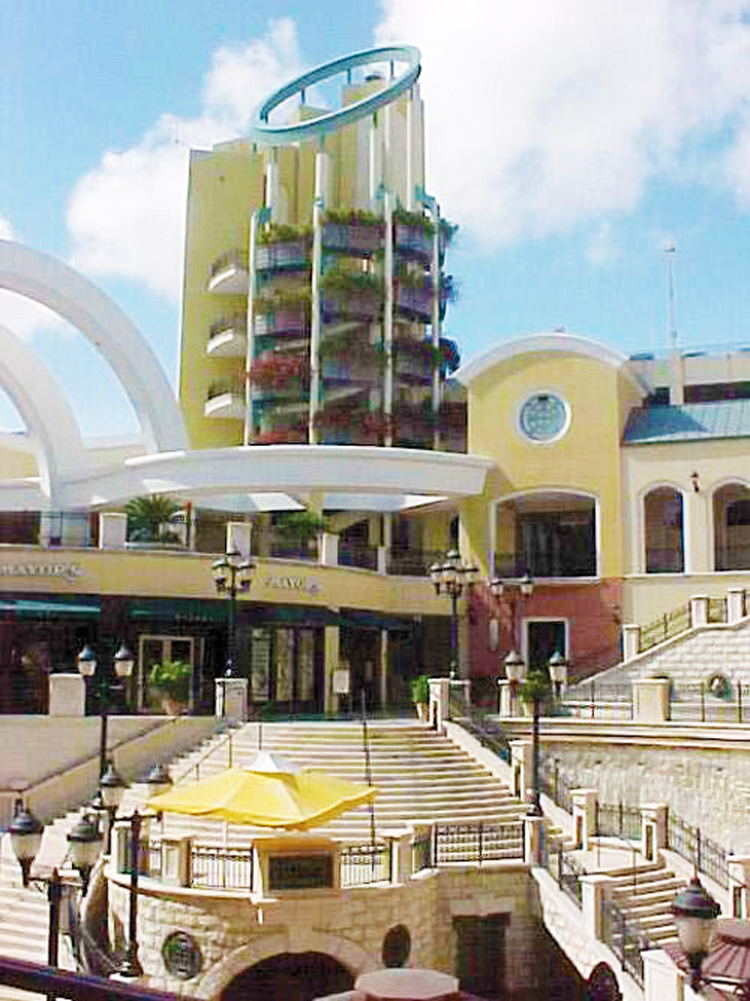 A big plus were the infrastructure improvements paid for by the developer to the tune of some $1.2 million which were used for the redevelopment of Sunset Drive from US1 to Red Road.

Simon Properties which owned the project essentially required national tenants who wanted to be in the premier Simon Malls to take a space at Sunset Place.  Remember when it opened in early 2001, the massive artificial Banyan Tree at the entrance with its programmed “thunder storms”, the Wilderness Café at the base, a large Sunset disk on the face of the building which simulated a sunset (that hasn’t happened in well over fifteen years!).   However, there was no major anchor like a Bloomingdale’s, Macy’s or Nordstrom.  Over the years, it was obvious Sunset Place was at the lower tier of Simon Properties, and the property and market mix deteriorated.   Pulling out early were FAO Schwartz, Niketown. Virgin Records and the IMAX Theatre.  And more recently Banana Republic, Armani, Disney Store, Victoria’s Secret, Gap all vacated.  The Shops at Sunset Place has demonstrably shown to be a lackluster mall.  A key flaw is Sunset Place faces inward and does not integrate with the surrounding community.

And things changed for the South Miami retail business community as well.  Competition for the disposable income dollar was now more challenging.  New venues opened, notably Merrick Park. The shiny and new clearly won out over the tried and old.

Over the last five years, retail itself has been increasingly challenged with convenient online shopping, avoiding all the pitfalls of live shopping.  That, coupled with the deterioration of Sunset Place, contributed mightily to the economic decline in our business district.

SUNSET PLACE ON THE HORIZON
And now a third time….
Since purchasing Sunset Place from Simon Properties for $110 million in late 2015, the new ownership team comprised of Federal Realty Investment Trust, Grass River Property, and the Comras Company, were engaged with the business and community leadership in developing a revitalization plan for the nearly 9 acre property.  What was being planned is a transformation of the property into a walkable urban center where people can live, shop, eat, gather, and conveniently commute to work on the Metrorail.  Plans call for newly designed street-level retail and two residential buildings comprising some 414 units. A hotel with approximately 182-rooms also is planned.  The addition of residential and hotel uses will provide a significant and sustained economic benefit to SOMI’s town center shopping and restaurant district by creating a consumer base within walking distance to the area’s existing businesses. 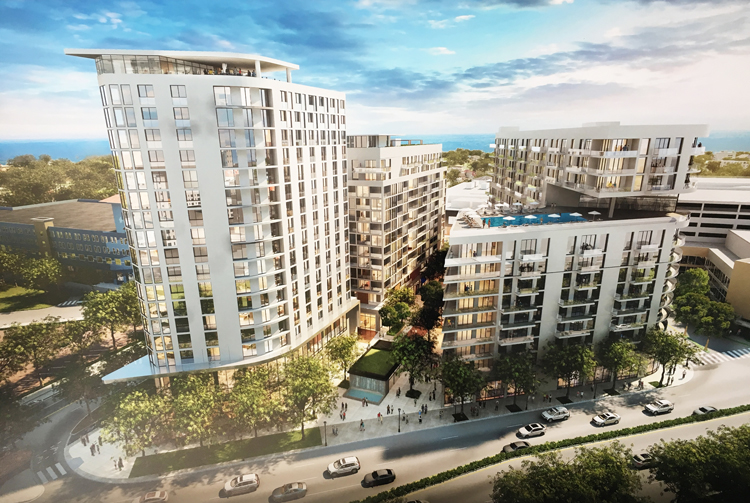 Revised architectural renderings by Zyscovitch & Associates take into account concerns raised by the community regarding the glazing on the face of the proposed hotel in foreground. The city approved structural height of 195’. It should be noted that unlike other new construction along the US1 corridor, the Sunset Place redevelopment calls for open green space and 30’ set- backs from US1.

On the drawing boards is a thorough program of façade improvements and the introduction of exterior facing storefronts designed to increase the center’s connectivity with the surrounding neighborhood.  Overall this revitalization effort will translate to a significant tax boast for the city’s budget allowing for great services and parks improvement without increasing residential taxes. 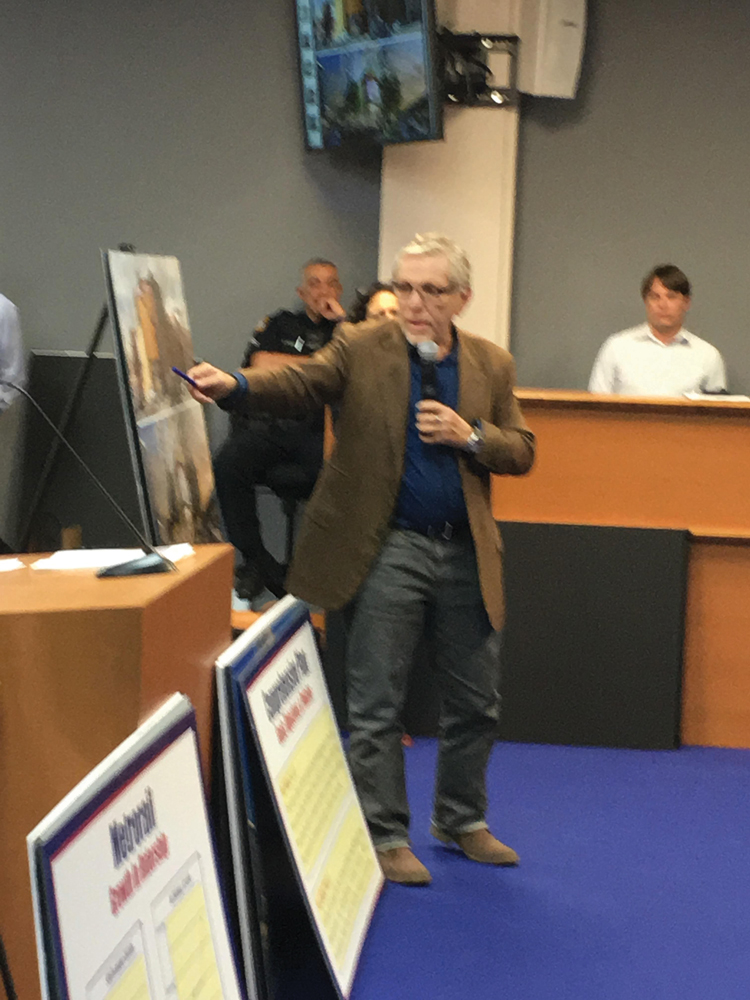 Architect Bernard Zyscovich presents his concepts for the redevelopment project.

However, the proposal hit a brick wall at City Hall, where land use changes require a unanimous vote of five out of five.  On November 6, 2017, the first of five enabling ordinances didn’t get passed (3-2 vote), and essentially the project was dead.  Communication between the city and the developer was nonexistent and the fear in the business community was that the developer would walk away from investing in the project. 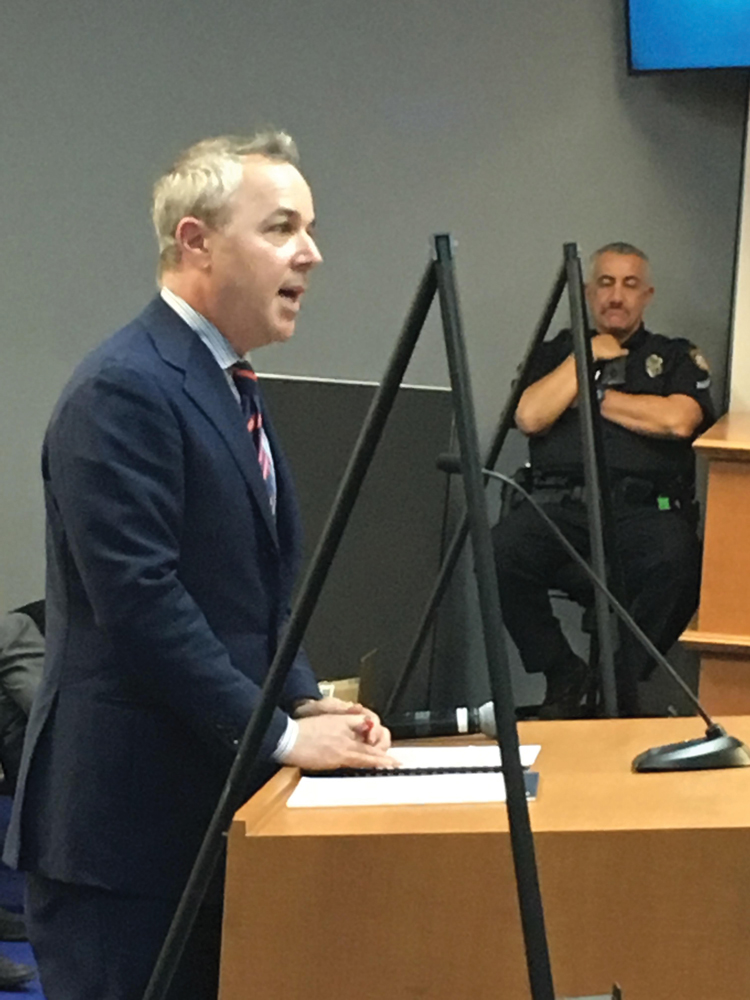 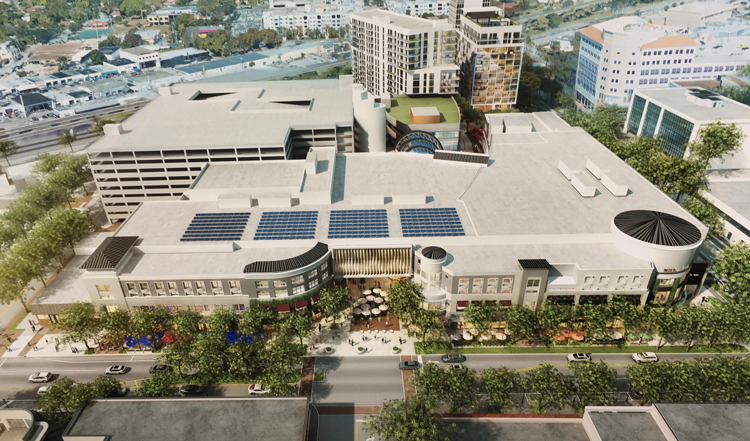 A referendum vote was presented to the South Miami electorate providing for a lesser majority (4/5) for major land use changes.  It prevailed: afterwards, discussions and negotiations with the developers and the city administration proved fruitful and the project was resuscitated.

The city promoted five community workshops for the project.  These “listening sessions” presented by the developers provided a framework for them to address some of the concerns raised by the community. 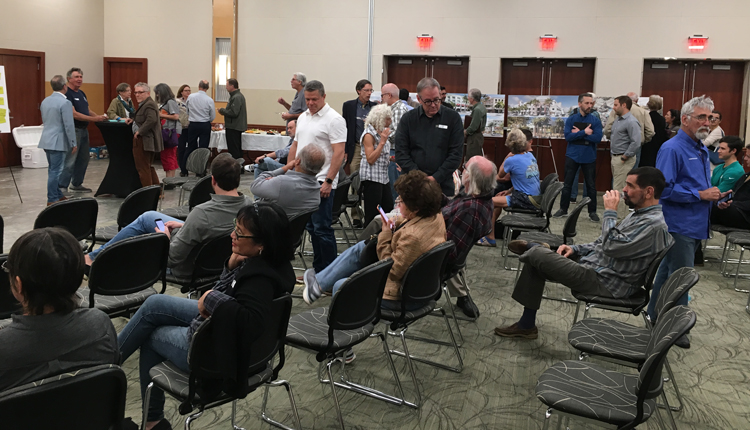 Photo of one of the five community “listening sessions” presented by the developers. 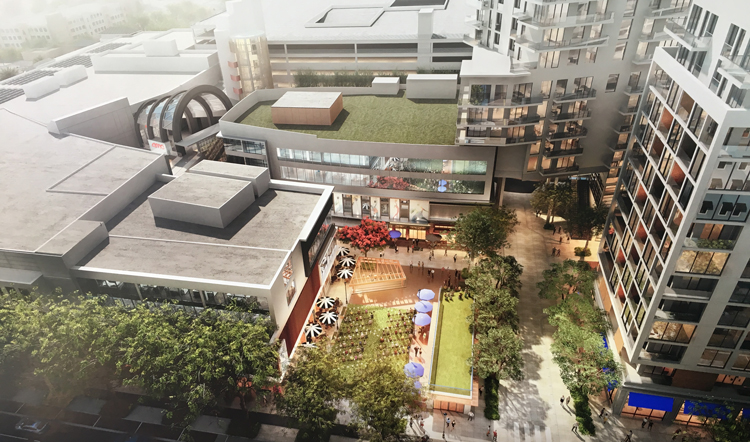 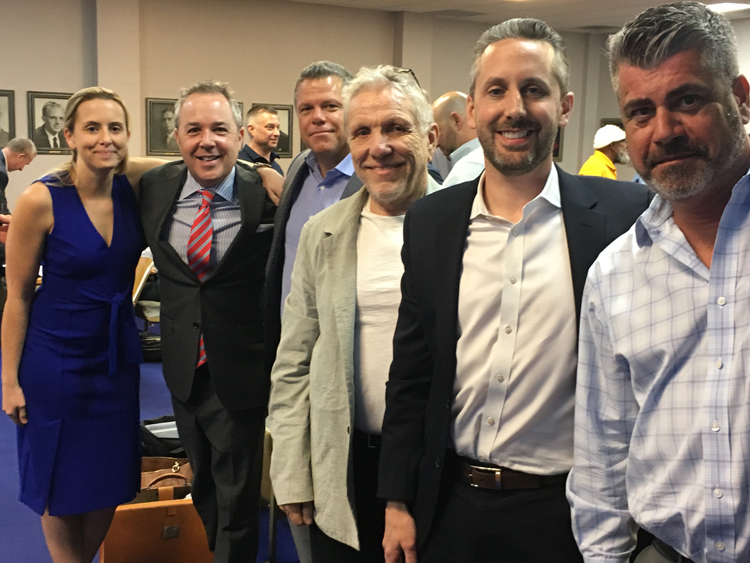 A jubilant development team with ownership, architect, attorney and lobbyist after the 5/5 vote for project approval.

And after a year of anxious waiting, the project was brought back to the City Commission and on Tuesday, April 23, 2019, the site plan of the project was approved with a unanimous vote. 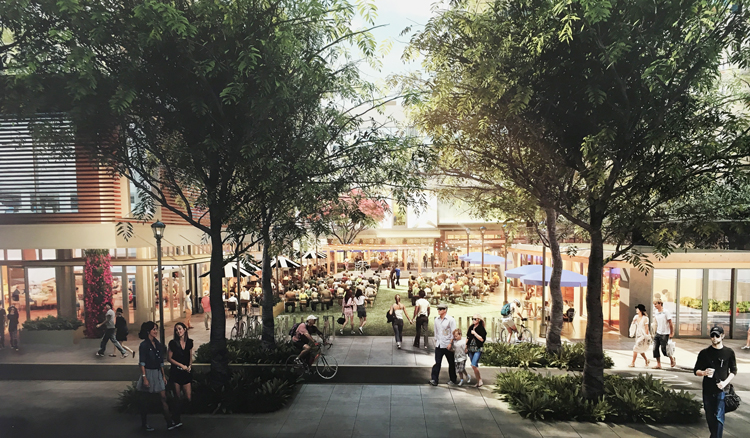 Follow SOMI Magazine as the redevelopment goes through its process for approvals, and final plans are presented.