You are at:Home»Topics»ARTS IN SOMI»UNCONVENTIONAL ART
By SOMI PUBLISHER on June 2, 2017 ARTS IN SOMI, JUNE/JULY 2017, Topics, Volume XII 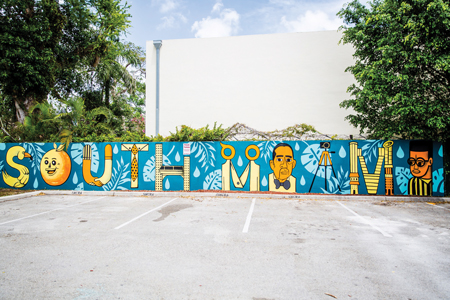 On Sunday, April 30th, a well-attended community mural experience took place in recognition of the South Miami Community Redevelopment Agency (SMCRA) and the historic Marshall Williamson community.   ArtSouth, a non-profit corporation, the SMCRA,  Unconventional, a local art agency, and the Dadeland Apple Store teamed up to design and create a mural masterpiece depicting the neighborhood identity. 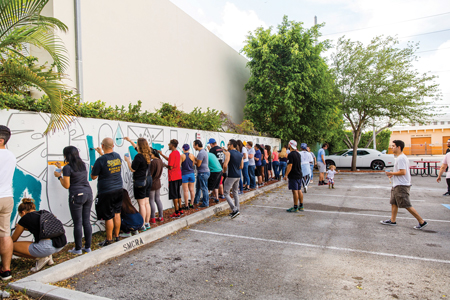 Students from ArtSouth’s after school program painting Baghead’s custom mural with volunteers from the Apple Store at Dadeland Mall.

Their role in this initiative was to fully produce the day of service so that Apple’s Dadeland employees could connect intimately with a Miami neighborhood in need of revitalization.  The Unconventional team identified and selected the nonprofit beneficiary, ArtSouth.  They also helped select the artist, Baghead, and the neighborhood, South Miami’s Community Redevelopment Agency. The team worked with the artist and local community representatives to design a piece of high quality art that is meaningful for local residents.

The mural was designed by Unconventional artists and executed by their Managing Partner, Jordan B. Magid and ArtSouth Board Chair, Janis Klein Young.  The mural focal point is their artist’s rendition of Marshall Williamson, surrounding by symbolic representations of community. ArtSouth was represented by several art students who participate regularly in service learning activities throughout the County. Apple Store provided the artistic labor by offering over 40 employees who not only familiarized themselves with SMCRA, but also were privileged to learn and participate in the historical significance of the mural project. 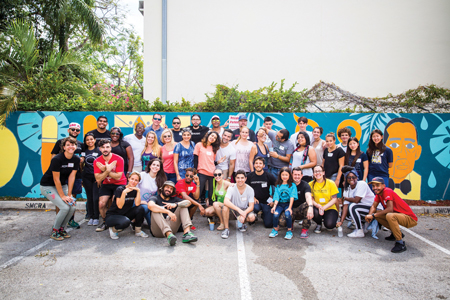 South Miami residents and Apple store volunteers celebrating their completed mural as a tribute to the city’s rich history. 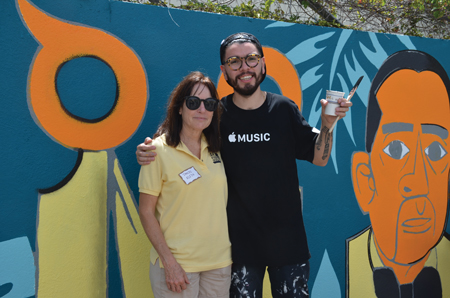 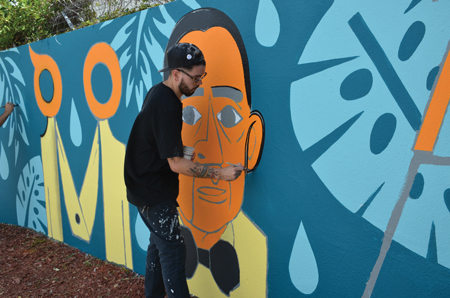