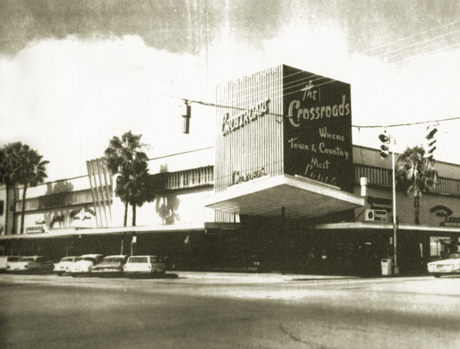 Designed in 1955 by M. Tony Sherman and Associates, this Modern, mid-century structure embodies the post-war exuberance for the “atomic age,” reflecting a belief in a brighter future.

On June 25, 1927, W. A. Forster was sworn in as South Miami’s first Mayor and the City began its nine decade journey. In this third installment of our six-part series we note the economic, building and institutional growth that has become the foundation of our development.

New Economic Prosperity
After the World War II boom, more businesses were opening and area residents were enjoying new economic prosperity. In 1954, the City reported that over $2,000,000 in building permits was realized, as private homes and commercial properties bloomed. Despite the usual South Miami political controversy (the sitting and previous mayors lobbied against it), construction of the new City Hall was approved by referendum in 1955 (350 in favor and 339 against). Designed by noted architect Henry George Fink, the governmental hub on Sunset Drive was dedicated in October 1956 by Mayor Paul U. Tevis. Wrote Tevis, “It is the opinion of many that the new City Hall marked the beginning of a new era in South Miami and that the building itself served as a criterion for future buildings of consequence. 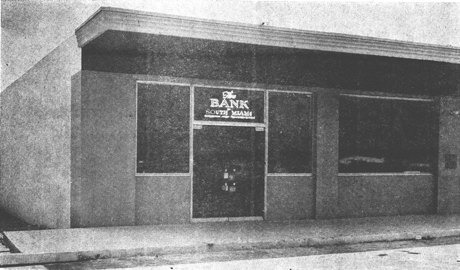 On April 3, 1952, the First National Bank of South Miami opened its doors

Managing Finances Locally
After many years of planning, the Bank of South Miami opened its doors on Sunset Drive, April 3, 1952. Prior to that residents traveled to Miami, Coral Gables or Coconut Grove to conduct their financial affairs. Eleven years later the Bank qualified for a national charter and the name changed to what we know today: First National Bank of South Miami. After 65 years, FNBSM remains the only bank headquartered and managed in South Miami. In addition to the hometown offices, they have offices in The Falls, Coral Gables and a recent new branch in Doral. Priding itself as the city’s “hometown bank,” FNBSM has partnered with the community from its inception and continues to contribute time and talent, event sponsorships, and funding to non-profit organizations within our community. 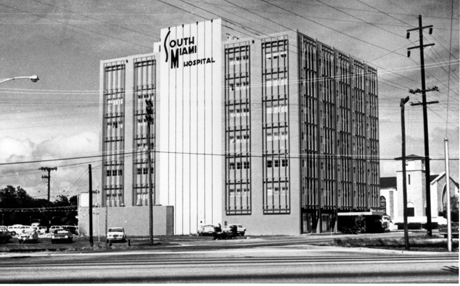 Medical Needs Met
To serve the health and well-being of the community, on February 22, 1960, South Miami Hospital opened with a 100-bed facility and 15 patients. In 1969, a medical service center was located on a single campus. Subsequent improvements in the mid-1980s expanded the hospital facilities east of Manor Lane, while creating a linear park for the area’s residential neighborhood. More recent renovations and buildings have come to pass with a new medical arts center, doctors’ offices and parking facilities.  The hospital, part of the Baptist Health of South Florida system, offers state-of-the-art medical technology and services; job opportunities; the ability to treat residents and others in the Emergency Center; and increased revenue to the City from medical offices. And in a demonstrable commitment to the care of our children in the community, since 2007, a free neighborhood clinic for uninsured children who live in the city located on the grounds of Murray Park has been supported by the Hospital. South Miami Hospital opened a new $75 million, 80,000 square foot Emergency Center and Surgical Suites in December 2012 and expanded its imaging area to provide the very best patient care to the community. 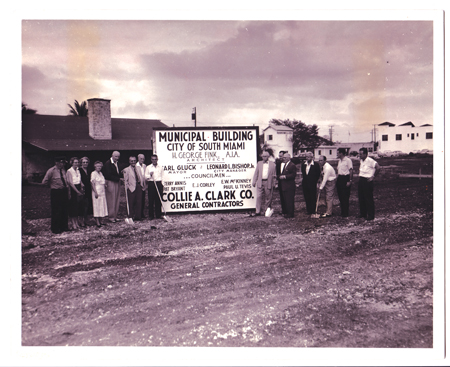 And is a New City Hall
now on the Horizon?

Ground breaking in 1955 for the
new City Hall on the west side of US1
and its present location. 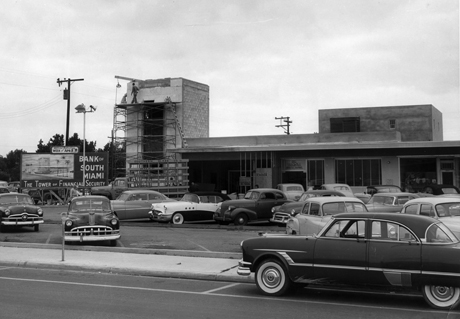 The hospital was recognized as a Magnet Hospital for Nursing Excellence in 2004, 2008 and again in 2014, by the American Nurses Credentialing Center, a part of the American Nurses Association. It was also on Solucient’s list of top 100 hospitals in the country, based on several quality indicators. South Miami Hospital was also ranked by US News & World Report as the number one Best Regional Hospital in South Florida and fourth in the entire state.

Residential Growth
To meet the needs of a growing residential community, in 1966 an eight-story residential apartment building, named the Mayan Tower, was built adjacent to the central retail district at 5880 SW 74th Terrace. Concern over the building height gave impetus to the establishment of the South Miami Homeowners Association (recently renamed, South Miami Neighbors). Since that time, height limitations in the area (and elsewhere in the City) have been a focus of much angst and debate among developers, city officials and residents. 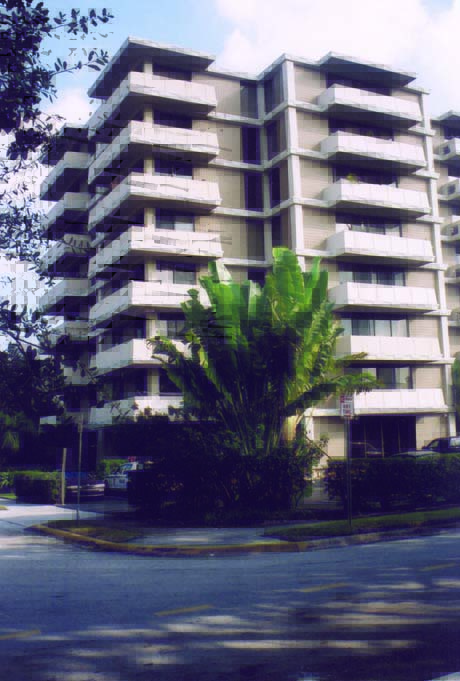 No More Parking on US1
Other developments in the City’s history at this time include this statement from Paul Tevis, “All parking in the North bound lane of US #1 Highway was discontinued, commencing March 1964.” Parking on US1—something almost impossible to imagine today! In 1967, the jurisdiction of the Fire Department moved to the County. In the decades of the fifties and sixties, schools were built, the library came to town and the constant drumbeat of South Miami politics pounded on unabated as many City Managers and Chiefs of Police were fired or willingly resigned. And in what many might think to be an odd choice in today’s movement to plant native vegetation in the City, the City Council named the Parkinsonia florida (Arizona’s state tree) as the official City tree in 1966. 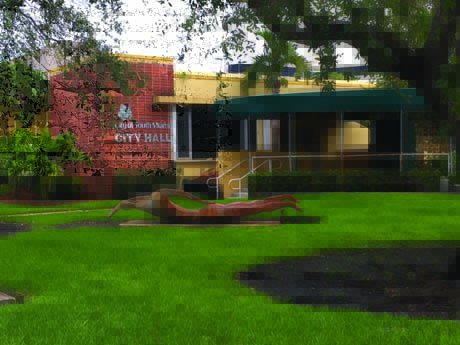 Up for community discussion and our elected officials vote, is the determination for the future of the City Hall property, with its 1950s municipal building, police station and the historic designated Sylva Martin Building.  The county library building may also be in play, as current discussions develop.

For well over a dozen years and under three different city managers, the prospect of building a new city hall and redeveloping the city hall campus, has at times, been fervently discussed.

The matter came to the forefront in the past year.  In November, 2016, a straw ballot was included with the presidential election.  An overwhelming majority of the electorate were in favor of entertaining the sale of city hall property. The cost of retrofitting the existing building (which is not ADA compliant) versus building a new city hall was under discussion.  Requests for Proposal were solicited; however, the process was cancelled due to some legal issues.

For some the entire matter has become an emotional issue.  Concerns were raised about the Sylva Martin Building.  Some feared the only historic building in the city’s ownership would be demolished.  Fears were allayed; the building would not be demolished.  However, it might possibly be moved to another location on the city hall site.

And what would be built on the city hall property?  Where would the city administrative functions, i.e., “city hall” be moved?  At first, there was some thought of putting a grocery store on the property, others thought office buildings, while others, residential units.  Would city hall be re-built on that site?  Obviously the proposed uses for the site would drive the value of the property for the developer.

For me, I have advocated the sale of the city hall property for many years.  It is too valuable a parcel to have underutilized.  We must seek the best use of the property.  Certainly what we are in need of are more residential units. If we populate the west side of the highway, it would bring new vitality to that side, and also spill over to the retail and restaurant district on the east side of US1.

I do believe the final plan for sale and development of the property should be a referendum and have an informed citizenry decide.