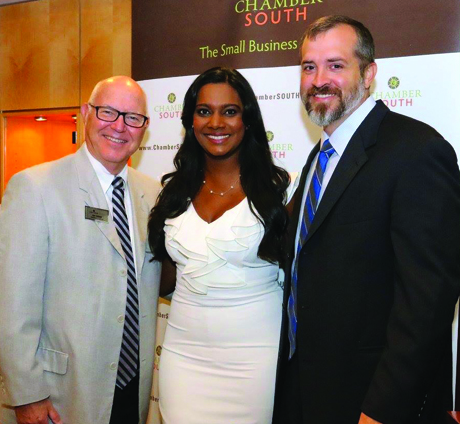 Starting its 86th year in service to the business community, ChamberSOUTH has leadership changes both at the board and executive levels.  Joe Gallaher, Board Chair for the 2016-17 year is followed by Ken Kistner as chair for the 2017-18 year.  And on the executive level, to serve as President and CEO of ChamberSOUTH is Brittnie Bassant, taking on Mary Scott Russell’s role who served for a decade as President.

ChamberSOUTH, as the “Small Business Champion” provides professional services and premium networking events to businesses located in South Miami, Pinecrest, Palmetto Bay, Cutler Bay and Kendall.  Its members, trustees and board members provide the critical impetus for sustaining and
building the membership.

Chamber leadership in the past year was skillfully managed by Joe Gallaher, a commercial broker and Vice President of NAI Miami for the past ten years.  When the revered Mary Scott Russell, a former South Miami Mayor, tended her resignation in April, he took on the role of executive recruiter and on-the-job guidance of the new executive,   Mary Scott continued to stay on through the selection process, contributing her time during through the transition.   In conducting a search, Joe reports that “we relied on social networking and conferring with those who have close ties to the business community.  We knew we had tough shoes to fill.”  Three finalists were interviewed and the selection committee was “wowed” with Brittnie Bassant’s demonstrable talents.  Brittnie Bassant was Mary Scott Russell’s recommendation to the Committee.  “It was a high honor to be recommended by Mary Scott” notes Brittnie.

Brittnie Bassant comes to the Chamber from the Deering Estate Foundation where she served as Operations Manager.   Prior professional work included serving as Outreach Director for Miami-Dade County Commissioner Lynda Bell; Outreach Tour Coordinator and Executive Assistant for the Everglades Foundation; and Public Relations Account Coordinator for Stuart Newman Associates.   It is with this experience that she brings her skill set in non-profit management, public relations and community outreach, event planning and management, community development, fund-raising, and policy development.

While refusing to accept the stigma of being referred to as a “millennial,” Brittnie has demonstrated considerable initiative and strong work ethic.  “I’ve always started from the bottom
and worked my way up.”

Brittnie’s goal is to expand the level of service the chamber provides to its members and the community, and particularly focusing on areas such as South Dade and West Kendall.

“As the ‘Small Business Champion’ the chamber goes a big step beyond local business associations.  The Chamber provides business-to-business, business-to-community, and business-to-government relationships.”  She plans to continue the rotating lunch and after-hours locations started by her predecessor, to allow all members to engage with the chamber.  We are the “voice and champion for all businesses in our service area. We will be doing more for them,” notes the new exec.

And following on the heels of Joe Gallaher, new Chamber Chairman Ken Kistner notes that he will enjoy working with Brittnie, “is a real young go-getter” in accomplishing the work of the chamber.

Kistner, Compliance Manager for CBT College, has served on the Chamber Board of Directors for seven years, and four years on the Executive Committee, including Treasurer.  He has chaired the Military Affairs Committee, the By-Laws Committee and served on organizational task forces of the board.  An avid bowler, he organized a bowling tournament with Chamber N-XT, and spearheads the VA BBQ program and the annual Veterans Day Brick Laying Dedicaiton Ceremony at the ChamberSOUTH Palmetto Bay office.

Having worked closely with Joe Gallaher, Ken wants to “build of Joe’s legacy and concentrate on building chamber membership and presenting viable events and activities for our members and the community.”  The recent board action taken over the summer to streamline the number of members and role of the Executive Committee and shore up the role of the Board of Directors was a good move, according to the new chair. “We want all our board members to be more actively engaged in building membership, serving our community and continuing to grow.”