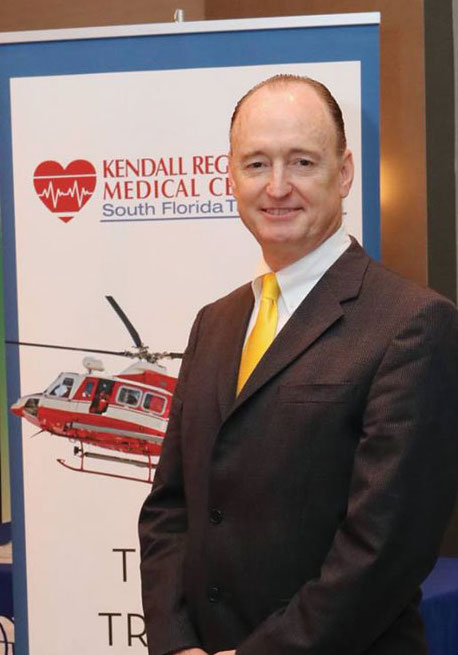 Peter Jude is one of those extremely dedicated individuals who works tirelessly at their craft.
For 25 years, he has been the marketing and public relations director for Kendall Regional Medical Center (KRMC). His position “grew out of a number of things that needed handling at the time, from assisting patient families to getting out a press release,” he said in an article for Community Newspapers, 2012.

Peter takes great pride in his association with the KRMC, a member institution of the HCA group, and frankly, seems more comfortable talking about the medical center than about himself. In his time with there, he has seen Kendall Regional grow with the addition of a $110 million West Patient Tower and the arrival of the new Trauma Center in 2011. Last year, the KRMC became a Level I Trauma Center. Kendall Regional Medical Center (KRMC) became a Level I Trauma Center on May 1, 2016. Building on the success of their Level II Trauma Center for adults, KRMC is certified to treat pediatric trauma patients, aged 15 years and younger. They are a 417-bed teaching hospital and one of only two Level I Trauma Centers (Ryder at Jackson is the other) located in Miami-Dade County. The trauma center serves patients from as far away as Key West.

A native of Baltimore, Maryland, Peter is the son of surgeon Dr. James Jude, a co-discoverer of the CPR method (Johns Hopkins University), and historic preservationist Sallye Jude. He is married and has two children. Dr. Jude moved the family to Miami when Peter was four years old to teach surgery at the University of Miami School of Medicine and later to be Cardiovascular Surgeon-in-Chief at Jackson Memorial Hospital.

Peter grew up in Coral Gables and attended Ransom-Everglades School. In 1983, he graduated from Westminster College in Fulton, Missouri where he studied economics, business administration and psychology. This combination of disciplines has served Peter well in his capacity at the KRMC.

Peter’s duties with the hospital extend to the community at large. He is heavily invested in serving the community in his capacities as a member of ChamberSOUTH, Doral Business Council, Westchester Miami Dade Chamber of Commerce, Greater Kendall Business Association, volunteer teacher in the Kids and Power of Work (KAPOW) program, and a past Cubmaster and Boy Scout Leader, as well as involvement with other civic boards. He has been recognized by KRMC for his volunteer activities and dedication to the community.

“Representing the hospital, inside its walls and outside to the Kendall community, are my primary responsibilities,” Jude said, reflecting on two decades of hospital service. “Serving the hospital’s interest also means becoming active in community affairs outside its doors, as well.” (As quoted in Community Newspapers, 2012.)