You are at:Home»Magazine Archive»Volume XIII»APRIL/MAY 2018»THE CHANGING FACE OF US1
By John Edward Smith on April 3, 2018 APRIL/MAY 2018, Topics, Volume XIII

Bookends to our brief sojourn down US1 from Sunset Drive to SW 61st Avenue are both iconic and memorable parts of the fabric of our community’s storied history, from the Dorn Brothers Buildings to FOX’S Sherron Inn. The magnificent Dorn Brothers building heralds the entrance into our town center retail and restaurant district; FOX’S enjoyed its own storied history for a period of over 65 years.

DORN BROTHERS BUILDINGS
Built by the Dorn Brothers in 1925, one of the first families of the Town of Larkins, the buildings are rare surviving examples of an architecture that belonged to the Florida Real Estate Boom of the 1920s.  Harold and Robert Dorn, build the Dorn-Martin Drug Store, the first Post Office and a branch of the South Florida State Bank which never opened because of the 1926 Hurricane.  After the hurricane the real estate boom was over the brothers got into their father’s fruit and vegetable business.  The Dorn Fruit and Vegetable Company became one of the largest shippers of the Hayden Mango, among other produce. 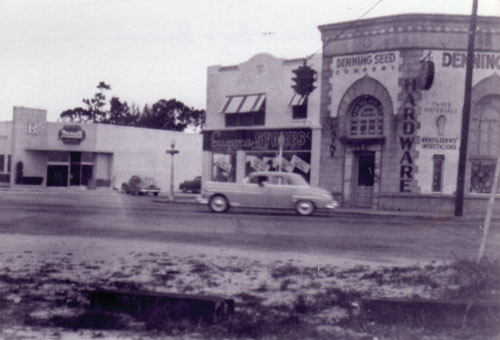 Ellen Uguccioni, Cultural Resource Consultant for the City of South Miami (2005), noted that the building is “best described as a Mission Style, which included the curvilinear center parapet, the broad expanses of stucco, use of barrel tile coping at the parapet, the engaged pilasters that separate the window and entry bays and the use of glazed ceramic tile for accent.”  The original Post Office is described as Mediterranean Revival.

Mary Elizabeth Dorn, known as “Mother Dorn” who had invested in Larkins land, had purchased five acres on Sunset Drive and Nervia Street for one hundred dollars.

Mother Dorn eventually sold the land to the Arvida company, and it is from them that the current owner, Harvey Amster, purchased the Dorn Brothers Buildings in 1958 for $90,000. 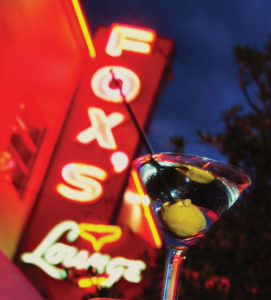 FOX’s Sherron Inn had been serving ‘em up for over 65 years from its location on US1. Drinking and dining at this popular spot have been something of a rite of passage for students, entertainers, professional sports stars, airline pilots and just about anybody else within walking and driving distance.  Original owners, Hank and Betty Fox had a concept for the establishment that included a bar, a family-friendly dining room and a liquor store all under one roof. The year was 1946, and H.W. Vanderboegh was serving as mayor in a South Miami of about 2,761 residents.

“Art Moderne” might best describe the building’s architecture, complete with a three-foot deep brow visually dividing the first and second floors on the exterior.  (See somimag.com, for the FOX’s cover feature.) 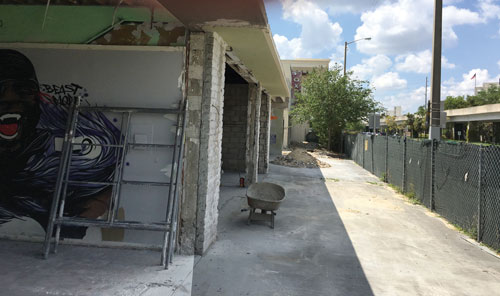 Below: Architectural rendering of the new FOX’S Plaza.

On the market as a full density project, it was purchased less than a year ago for $7.4 million by LNDMRK Development and Wynwood Retail Co.  Engaging architect Joseph Gomez, who works with historic redevelopment retail structures, the new owners opted to develop the property more to the scale of the residential neighborhood.  Tony Arellano of DWNTWN Realty Advisors who is the broker on the redevelopment is bringing in “interesting, compelling, craft food and entertainment concepts.”  Salty Donuts is one concept ready to come, and yes, there will be a FOX’s Bar in a new building with the “old concept” And the sign will remain (we just have to find the tail that got chopped off years ago!).  Anticipated completion is in three months.

AMSTER / INFILL DEVELOPMENT
The Amster Building, built in 2000, was the first genuine “main street” building constructed in South Miami in half a century.  The building fronts both US 1 and the pedestrianized segment of Dorn Avenue across from the South Miami Metrorail Station. The Hometown Plan (1992) recognized that sites like these, within close proximity to Metrorail and in a mixed use downtown, make it possible to strike a balance between the demands for parking and for creating spaces for people.  Buildings with a mix of uses produce unique synergies; people can work, live and dine in a walking environment with less dependence on car trips, noted building architect Marice Chaél. The Amster Building exterior design includes civic art by Cuban sculptor Tony Lopez on the bas-relief panels depicting tropical flora that grace the balconies facing South Dixie Highway. 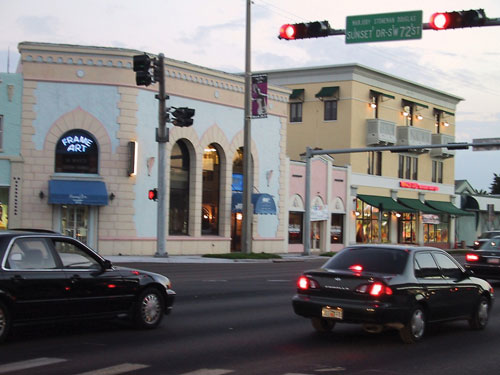 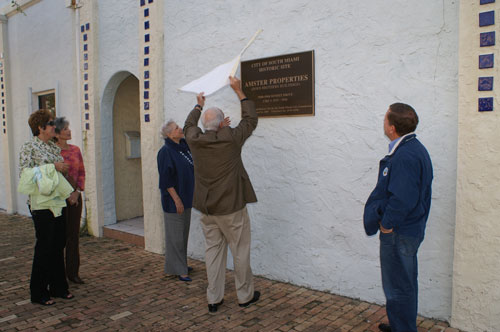 In August 2005, the Amster Properties (a/k/a Dorn Brothers Buildings) located at 5900-5904 Sunset Drive, were designated as a historic site in South Miami. Harvey Amster unveils the Historic Designation plaque as family and civic leaders look on. 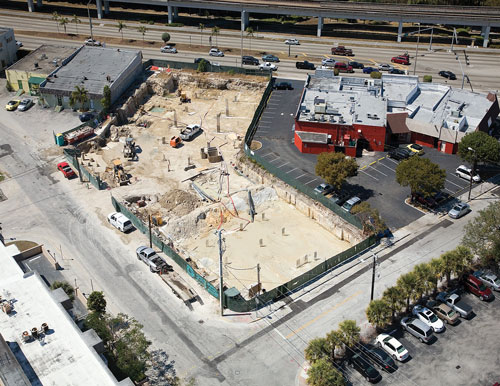 SOMI BUILDING
5966 SOUTH DIXIE HWY.
In 2006, developer/builder Marcelo Fernandes of Oxford Universal acquired the lots for $5.4m.  Although the project conformed to the “Hometown Plan” construction was delayed on the project for two years as the developer wrestled with the City, residents and FDOT to satisfy neighbor concerns. For eight months, extensive subterranean foundation work has been done to the tune of $1m to accommodate underground parking, and the developer undertook a water main extension and other infrastructure improvements in the area, including aesthetic enhancements with the undergrounding of utilities.  Extensive administrative delays coupled with a recession, cost Fernandes to lose the property, however as Oxford owned the permit, they continued with the construction.

The configuration of the lot called for some creative design.  Mateu Architecture Design was called upon to design the building.  As part of their tenets, they “embrace new technology and new materials any time that it can enhance the core design principles and make our projects even better.”   Marcelo Fernandes much appreciated collaborating with Mateu, as the building was constructed of recycled materials, aluminum siding, efficient cooling system and high efficiency lighting. 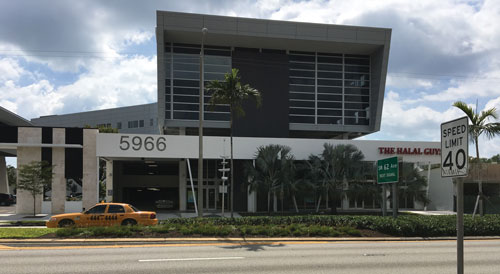 At the end of 2014, eight years after the property was acquired, the building received its Certificate of Occupancy.  Leasing of the building was delayed by the new owners, and only in the last two years have tenants begun to populate the office building/retail spaces.

When Büro’s CEO Michael Feinstein was searching for this newest location, he zeroed in on the “non-traditional architecturally interesting building” at 5966 South Dixie Highway.  In August 2016 he signed a lease for two floors of 13,000 sq. ft.  Similarly dentist Arnaldo Lopez had eyed the building to open his new SOMI Dental Group practice. 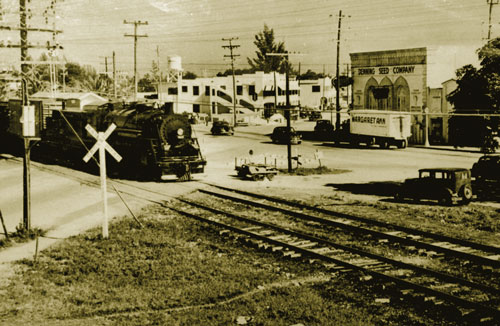 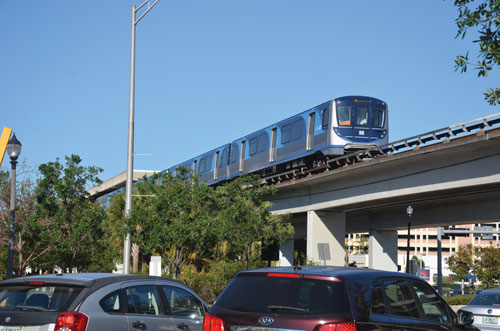 ALWAYS A RAILROAD TOWN
The Florida East Coast Railway brought prosperity to the fledgling pioneer village of Larkins turned city. The early settlers moved their base of operations to the site of the railway to take advantage of a reliable way to get their goods to market and to build commerce in their new community.  South Miami was a T.O.D.D. (transit oriented development district) from the get-go.

In 1979, the FEC’s mainline was cut back to its current terminus in downtown Miami when a 9.5 mile segment of the mainline between there and Kendall was sold to Dade County Transit, which then built the southern half of the elevated Metrorail system on the former right-of-way.

Regarded as an important ingredient in the city’s future prosperity, the opening of the Metrorail station in 1983 was greeted with a marketing campaign created to bring attention to this small city just south of Coral Gables.  “Always a Railroad Town” was the slogan; a calliope played and city officials donned railroad engineer’s caps.  South Miami was the only station on the route that had a viable downtown/commercial area in proximity to the station. At $866 million, Metrorail was the largest public works construction project in Dade County’s history at that time. 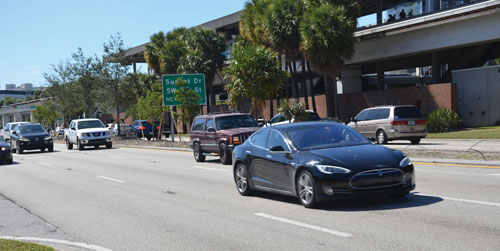 FDOT $625K SOMI BEAUTIFICATION INVESTMENT
In March, 2017, after four months of construction, Florida Department of Transportation completed a $624,021 landscape project on US1 within the City of South Miami boundaries, that is, from 57 Avenue to 80 Street.  For many years, motorists coming through our community saw a barren and poorly landscaped US1 median, while Coral Gables to the north had their distinct Royal Palm landscaped median.  Addressing the issue wasn’t a priority for years until a new professional city administration took the deficiencies to heart and decided it was time to make a change. 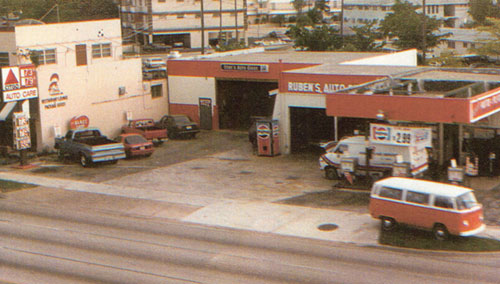 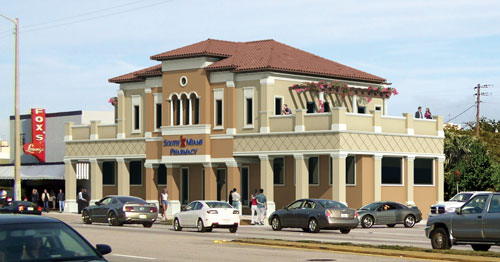 SOUTH MIAMI PHARMACY
A gas station in South Miami since 1939, the property at 6050 South Dixie Highway was acquired in mid-2007 for $1.8 million by Dr. Bardisa, owner of South Miami Pharmacy.

Home to a 3,500 sq. ft. pharmacy on the ground level, an office suite and state-of-the art compounding room on the second level, construction costs on the new facility were $1.5 million.

Designed and built by Wagner Cabrera, the design of the building is robust and massively weighted. It has some attenuated elements borrowed from the Mediterranean Revival style, most notably the heavy cornice running along the top. The second story of the building has recesses and protruding elements that help to relieve some of the mass of the first floor and by incorporating a trio of windows above a protruding band. This assembly also serves to announce the orientation of the front entrance of the building. The angularity of the first floor is repeated in the size, flattened surrounds, and arrangement of the windows. 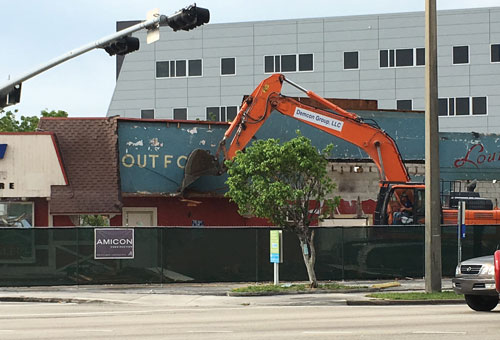 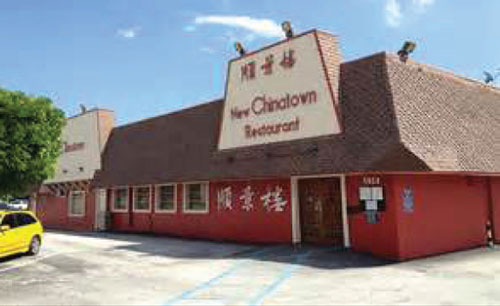 NEW CHINATOWN REDEVELOPMENT
Now completed is a transformative space and “new gateway into SOMI” on the .71 acre at US1 and 73 Street. This is where once stood a favorite eatery New Chinatown, with gourmet Chinese cuisine and great wines served for many, many years, and Swim, Bike & Run, a tri-shop on the corner. Some readers may recall another favorite, Le Glacier Restaurant, serving great French cooking in a laid back setting.

The parcel was acquired by Greenstreet Real Estate Partners for nearly $5.7 million in October 2013.  The new owner has redeveloped the property into a mixed retail-office use.

STA Architectural Group designed the two-story development.  Todd Tragash, AIA, principal of the firm, spoke with SOMI Magazine about the design which is inspired by South Florida.  The skin of the building is limestone and transparent glass, giving a very open experience. The building with three structural design elements take up less than half of the lot size: the lot is 30,833 sq. ft.; the building 14636 sq. ft. (under AC).  This provides for great open spaces and a plaza in the front where the building is set-back 30’ from US1.  Lead designer on the project was Jonathan Caruso. A unique feature incorporated into the building is the “paseo” or promenade which cuts through the project. At ground level the width is 18.5’ while at the top, 29’ wide, adding to the spatial openness that is created also with the glass coverings.  A specimen tree, a large sea grape is placed at the plaza entrance, with a planting of Washingtonia Palms in the paseo.  Other landscaping along US1 and on to 59 Court will be native species.  This complements very nicely the major $520,000 US1 median beautification with native trees and shrubs being planted by FDOT. 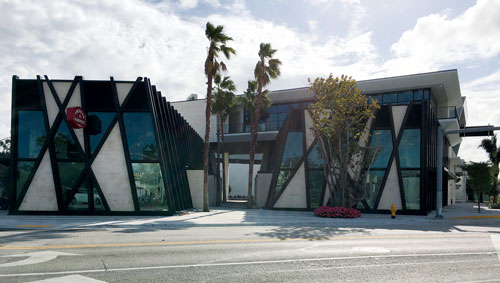 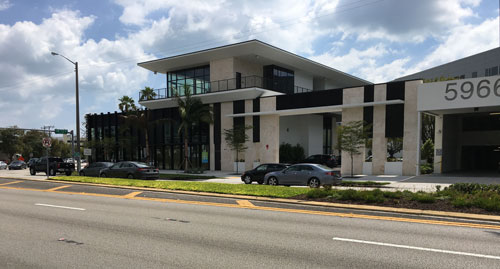 What changes will US1 experience over the next decade?