The daughters of South Miami residents Zack and Rosemary Mann were born and raised right here and are fourth-generation Floridians.  Singer-songwriter duo have chosen appropriately and succinctly, to call their act the “Mann Sisters.”  At the age of 22 their dedication and hard work have reaped rewards which have catapulted them to early fame in Miami and Nashville.

As students attending Palmer-Trinity High, the Mann sisters excelled in academics, sports, art and music. So much so in fact that they both received full scholarships to attend the University of Miami’s Frost School of Music. They tried it for a while, but concluded that there was no time like the present to pursue their career together in music.

The sisters describe their musical style as acoustic-based and a mix of American rock and modern country. Their vocal style takes advantage of their talent as singers and the fact that they share that warm and close harmonic quality particular to siblings. They play a variety of musical instruments and are keen to learn others.

The Mann sisters enjoy “growing their talent,” as they refer to it. They cut their teeth on gigs at places such as the Titanic Brewery, John Martin’s Irish Pub, and Tobacco Road among many other music spots in Miami. They developed a loyal following before graduating from high school.

The sisters caught the attention of singer-songwriter Fernando Perdomo, who produced their debut EP (extended play), titled “The Mann Sisters.” All the songs were written and played by Lauren and Alexandra, with the rhythm section of Perdomo on bass and Derek Cintron on drums.

A little less than two years ago Alexandra and Lauren moved to Nashville, where they continue to perform regularly for loyal followers in Tennessee. And those fans came out in force when the duo was booked at Nashville’s famous Bluebird Cafe–their online tickets sold out in three minutes. The sisters have received accolades like the DisCovery Award for their song “Halloween Night” (recorded 2012). This song was chosen by MusicRow Magazine’s most respected music critic, author and historian, Robert Oermann. The popularity of “Halloween Night” and their first single “Breath Slow” has garnered heavy airplay on thousands of radio stations from Nashville to Key West.

The Mann Sisters have performed at the Broward Center for the Performing Arts in Fort Lauderdale, The Listening Room in Nashville, The Miami Music Festival and Puckett’s in Nashville. They continue to play gigs whenever they are in the Miami area.

When asked about their future, they will tell you that they want to remain successful for a long time. “If it wasn’t fun, I wouldn’t be doing it,” said Lauren.

Here’s hoping they find it fun for a very long time. 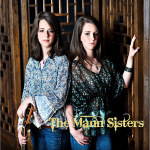 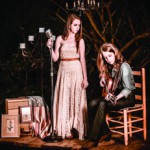 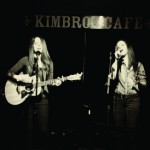